Admiralty Inlet and Puget Sound were sculpted by thick and extensive glaciers that advanced south to just beyond Olympia.  Glacial sediments (glacial till and outwash) were deposited during the last 2 million years by numerous glacial advances, the most recent of which was around 15,000 years ago.  Glaciers covered the area in several thousand feet of ice.  As glaciers moved, sediment was transported by the ice and deposited along the way.  This created many of the long and narrow hills and lakes we see in the planning area today (WA DNR).

Puget Sound is a complex estuarine system of four major interconnecting basins, three of which have fjord-like characteristics.  The principal entrance from the Strait of Juan de Fuca is at the northern end of Admiralty Inlet, with a much smaller connection through Deception Pass.  The three major fjord-like basins include the Main Basin, with an entrance sill located at the northern portion of Admiralty Inlet near Port Townsend; Hood Canal, with its entrance sill at the northern end near the location of the Hood Canal floating bridge; and Southern Sound, which is a complex of two large inlets and numerous smaller inlets and connecting channels.  The Southern Sound entrance sill is at The Narrows.  In each case sill depths are approximately 73 meters (40 fathoms) and basin depths generally are near or exceed 180 meters (100 fathoms).  The fourth basin is the Whidbey Basin, comprised of Possession Sound, Port Susan, Saratoga Passage, and Skagit Bay.  Deception Pass is the northern terminus of the Whidbey Basin (Encyclopedia of Puget Sound).

The area has a maritime climate with cool summers, mild winters, and abundant rainfall.  Lowland temperatures range from 40˚F in January to over 70˚F in summer.  Annual precipitation is between 18 and 50 inches.  Fog is also common throughout Admiralty Inlet during autumn and winter months.

The mean tidal range for Admiralty Inlet is from 5.2 to 6.0 feet, and the diurnal tidal range is typically from 8.4 to 9.4 feet.  In Admiralty Inlet and Puget Sound, the tidal currents are subjected to daily inequalities similar to those of the tides.  Velocities of two to seven knots occur from Point Wilson to Point No Point.  In the more open waters of the sound south of Point No Point the velocities are much less.  At Point Wilson and at Marrowstone Point, slack water occurs from one-half to one hour earlier near shore than in mid-channel.  In the winter, when south winds prevail, there is generally a north surface drift which increases the ebb current and decreases the flood current.  This effect is about 0.5 knots between Nodule Point and Bush Point (NOAA 2014).

The Admiralty Inlet area is plentiful in natural, cultural, and economic resources, all at risk of injury from oil spills.  Potential oil spill risks to these resources include rail transportation and facilities, large commercial vessels, Washington State Ferries, waterfront facilities, road transportation, aircraft, recreational boating, and other oil spill risks.  This section briefly discusses these risks and how they could impact the GRP planning area (WA Dept. of ECY 2015).

This area contains a wide variety of benthic, aquatic, riparian, and upland habitats that support a complex diversity of wildlife including birds, mammals, fish, and amphibians. Due to their life histories and/or behaviors, some of these species are unlikely to be directly oiled during a spill incident but may be disturbed by other operations such as cleanup, reconnaissance, or fire suppression activities. Some of the bird species are resident throughout the year, but many others seasonally migrate outside the basin. Several the species found in this area are classified as threatened or endangered under the Federal Endangered Species Act or Washington State guidelines.

Areas of concern include shorelines with natural riparian vegetation, islands, wetlands, streams, and river mouths (both free-flowing and impounded), and shallow backwater areas – especially adjacent to natural shorelines. Public parks, private lands, and recreational areas also present within the area. The number that precedes the area name in the list (below) corresponds to the numbered area on the map. 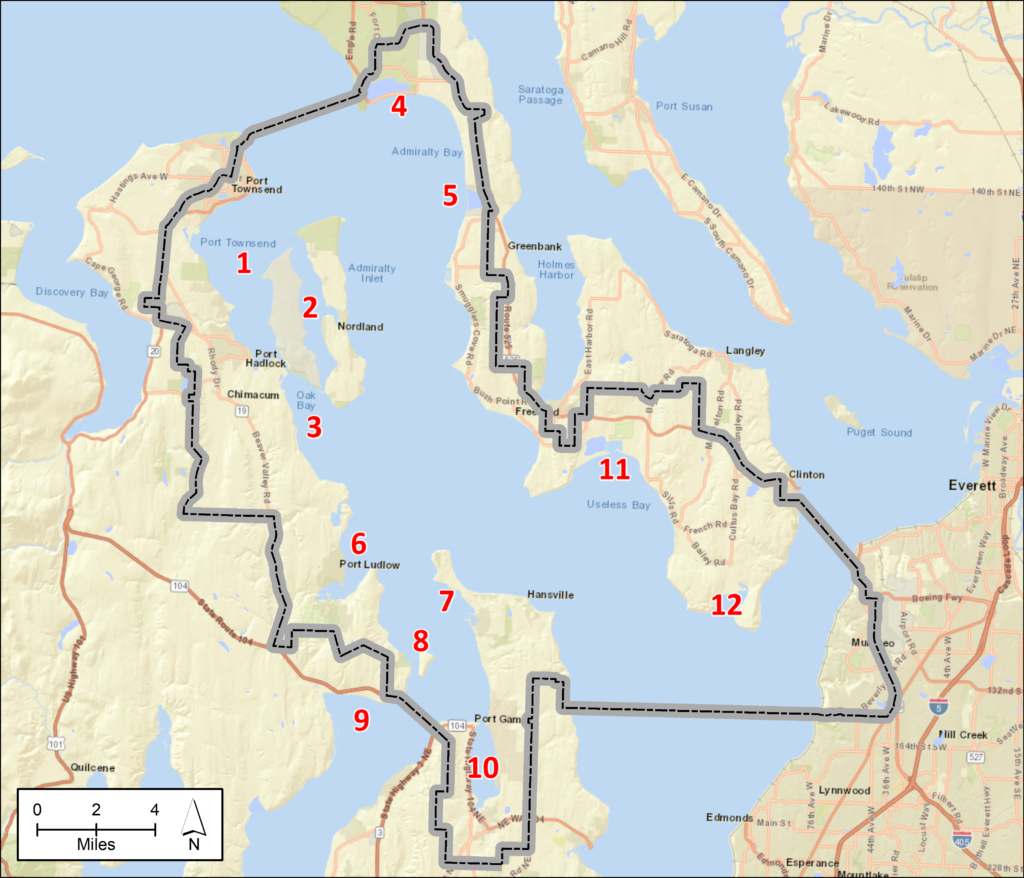