This section provides a description of the physical features, hydrology, climate, winds, tides and currents found in and around the Clark, Cowlitz, and Southwest Lewis planning area and includes an overview of the oil spill risks.  The planning area extends from Vancouver in the south to just north of Winlock, traces US Highway 12 east to Mayfield Lake, and runs in a narrow strip from Kelso/Longview southeastward to Battle Ground. Portions of the Coweeman, Cowlitz, Kalama, Lewis, and Toutle Rivers flow through this area.  The communities of Battle Ground, Castle Rock, Kalama, La Center, Longview/Kelso, Ridgefield, Toledo, Vader, Vancouver, Winlock, and Woodland are located within the boundaries of this planning area, as well as parts of Lewis, Cowlitz, and Clark Counties.  The Chehalis River and Lower Columbia River GRPs border this planning area to the north and southwest, respectively.

The geographic features of the planning area are defined by their location between the eastern flanks of the Willapa Hills and Columbia River and the western foothills of the Cascade Mountain Range. This geographic depression is a portion of a larger area known as the Willamette Valley-Puget Trough that runs north to British Columbia and south to Oregon. Significant transportation systems in the corridor include highway, rail and pipelines routes, as well as ocean-accessible ports on the Columbia River. The southern portion of the planning area is part of the greater Portland metropolitan area.

The Columbia River is the fourth-largest river in North America, draining an area equivalent to France. All the rivers and creeks within the planning area are tributaries of the Columbia River and drain in a southerly or westerly direction. Several organizations, such as the US Geologic Survey, maintain stream gages on some these watercourses. Please visit the USGS National Water Information System for current flow conditions.

The planning area falls within the East Olympic-Cascade Foothills climate zone of Washington. The average temperatures in January range from a high of 38 to 45 degrees Fahrenheit (F) to a low of 25 to 32 degrees F. In July, the average high ranges from 75 to 80 degrees F to a low of around 50 degrees F. Snow accumulation is low, with an average of less than 10 inches annually. However, this total increases greatly in the nearby foothills.

Tidal influence is present in the planning area. The force of a flood tide on the Columbia River is experienced far inland. For example, the first three miles of the Kalama River (up to the Modrow Bridge) are subject to this influence. The Lewis River watershed is affected east of I-5 at times. The Cowlitz and the Coweeman Rivers are influenced north of Longview/Kelso.

Currents for the rivers are dictated by the season and precipitation. Dams on the Cowlitz (TPU’s Mayfield), Toutle (USACE’s Mount Saint Helens Sediment Retention Structure), and Lewis Rivers (PacifiCorp’s Merwin) control the flow to some degree.

The planning area has an abundance of natural, cultural, and economic resources, all at risk of injury from oil spills. Potential oil spill risks include facilities, trains, oil pipelines, large commercial vessel traffic, road systems, aircraft, recreational boating, and other oil spill risks. This section briefly discusses these risks and how they could impact the region.

This area contains a wide variety of aquatic, riparian, and upland habitats. These habitats support many of Washington’s salmonid species and other wildlife. In addition to those species directly at risk to oil spills, others (due to their life histories and/or behaviors) that are unlikely to become directly oiled during a spill incident may be disturbed by other operations such as cleanup, reconnaissance, or fire suppression activities. Some of the bird species are resident throughout the year, but many others seasonally migrate outside of the area. 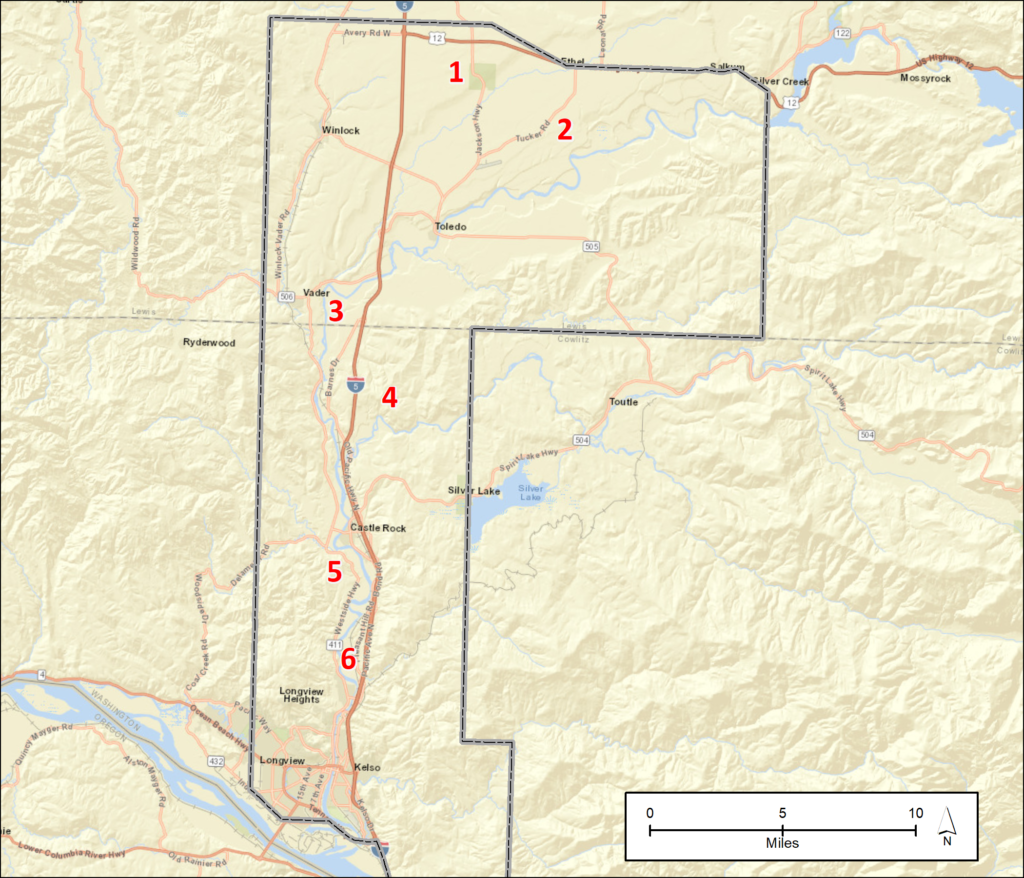 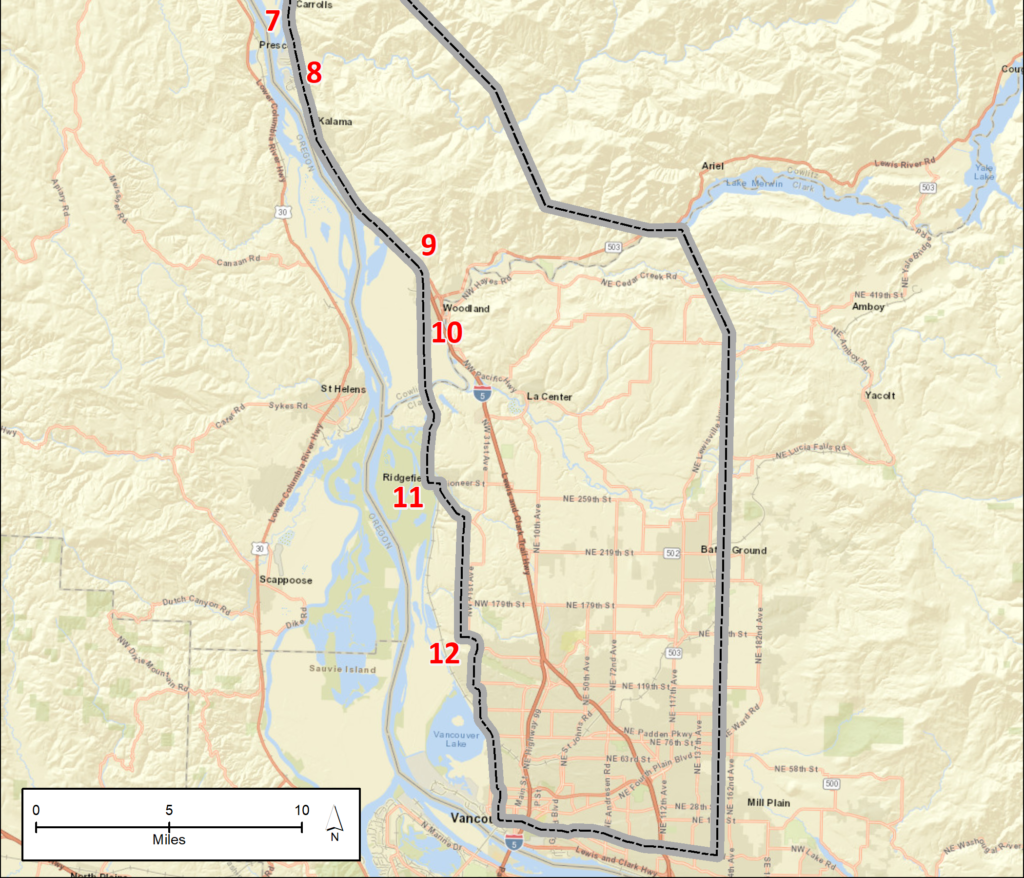 Culturally significant resources are present within the planning area. Information regarding the type and location of cultural resources is maintained by the Washington Department of Archeology and Historic Preservation (WDAHP). This sensitive information is made available to the Washington Department of Ecology for oil spill preparedness and response planning. The Tribal Historic Preservation Offices (THPOs) or Cultural Resource Departments of local tribes (see table) may also be able to provide information on cultural resources at risk in the area and should be contacted, along with WDAHP, through normal trustee notification processes when significant oil spills, or smaller spills above reportable thresholds, occur in the area.

During a spill response, after the Unified Command is established, information related to specific archeological concerns will be coordinated through the Environmental Unit. In order to ensure that tactical response strategies do not inadvertently harm culturally sensitive sites, WDAHP should be consulted before disturbing any soil or sediment during a response action, including submerged soils or sediments.  WDAHP and/or the Tribal governments may assign a person, or provide a list of professional archeologists that can be contracted, to monitor response activities and cleanup operations for the protection of cultural resources at risk. Due to the sensitive nature of such information, details regarding the location and type of cultural resources present are not included in this document.

Oil spills pose a significant risk to indigenous cultures, indigenous communities, subsistence harvests, and tribal treaty resources when spills impact land and water used for cultural and traditional practices. All Tribes with land, waters, usual and accustomed (U & A) areas, tribal ceded areas, tribal fisheries habitat, archaeological sites, or other interests should be notified of all spills impacting or potentially impacting these areas. The Northwest Regional Contingency Plan provides more information on tribal engagement during a response. Contact information for the tribes in this planning area can also be found in the Spill Response Contact Sheet. If you are unsure of which tribes to involve in the response, then reach out to all of them and allow them to decline participation.

The finding of human skeletal remains will be reported to the county medical examiner/coroner and local law enforcement in the most expeditious manner possible. The remains will not be touched, moved, or further disturbed. The county medical examiner/coroner will assume jurisdiction over the human skeletal remains and make a determination of whether those remains are forensic or non-forensic. If the county medical examiner/coroner determines the remains are non-forensic, then they will report that finding to the Department of Archaeology and Historic Preservation (DAHP) who will then take jurisdiction over the remains. The DAHP will notify any appropriate cemeteries and all affected tribes of the find. The State Physical Anthropologist will make a determination of whether the remains are Indian or Non-Indian and report that finding to any appropriate cemeteries and the affected tribes. The DAHP will then handle all consultation with the affected parties as to the future preservation, excavation, and disposition of the remains.

Any human remains, burial sites, or burial-related materials that are discovered during a spill response must be treated with respect at all times (photographing human remains is prohibited to all except the appropriate authorities). Refer to National Historic Preservation Act Compliance Guidelines (NWRCP Section 9403) during an emergency response.

Procedures for the Discovery of Cultural Resources

If any person monitoring work activities or involved in spill response believes that they have encountered cultural resources, all workers must stop immediately and notify the Unified Command and Cultural Resource Specialist. The area of work stoppage must be adequate to provide for the security, protection, and integrity of the material or artifact(s) discovered.

Prehistoric Cultural Resources (may include, but are not limited to, any of the following items):

Historic cultural material (may include any of the following items over 50 years old):

Socio-economic sensitive resources are facilities or locations that rely on a body of water to be economically viable. Because of their location, they could be severely impacted if an oil spill were to occur. Economically sensitive resources are separated into three categories: critical infrastructure, water dependent commercial areas, and water dependent recreation areas. That section provides a list of economic resources for this area.

The Environmental Unit (Planning Section) may recommend flight restriction zones to minimize disturbance or injury to wildlife during an oil spill. Pilots/operators can decrease the risk of aircraft/bird collisions, prevent the accidental driving of wildlife into oiled areas, and minimize abandonment of nests by keeping a safe distance and altitude from these identified sensitive areas.

In addition to restrictions associated with wildlife, Tribal authorities may also request notification when overflights are likely to affect culturally sensitive areas within reservations.  See Oil Spill Best Management Practices (NWRCP Section 9301) for more information on the use of aircraft and helicopters in open water and shoreline responses.

The Wildlife Deterrence Unit within the Wildlife Branch (Operations Section) manages wildlife deterrence operations. These are actions intended to minimize injuries to wildlife by keeping animals away from the oil and cleanup operations. Deterrence activities may include using acoustic or visual deterrent devices, boats, aircraft or other tools. The Wildlife Branch works with state and federal agencies, and the Environmental Unit (Planning Section), to develop deterrence plans as appropriate.

The following are located within the planning area: