This section provides a description of the area’s physical features, hydrology, climate and winds, and includes an overview of oil spill risks in the Chehalis River area. The planning area begins on the Chehalis River, upstream of Cosmopolis at River Mile (RM) 4. It follows the river southeast to the city of Chehalis (RM 70), and then west to Pe Ell (RM 110). The plan also covers the lower few miles of tributaries, including the South Fork Chehalis River, Newaukum River, Skookumchuck River, Black River, Satsop River and Wynoochee River, and many other creeks and streams. The lower 4 miles of the Chehalis River, from Cosmopolis to the river mouth, is included in the Grays Harbor GRP.

The upstream boundary of the GRP planning area is near the river’s source in the Doty Hills, northeast of Willapa Bay, and along the South Fork of the Chehalis in the Boistfort Prairie, west of Winlock. This area is a mix of forested hills and agricultural valleys, from 99% forest cover along Elk Creek near Doty, to 17% agriculture between Curtis and the Newaukum (Chehalis Basin Partnership). Throughout the watershed, “principal crops include hay and silage, with some vegetables and small grains. Land is also used for pasture” (Chehalis Basin Partnership). The area upstream of Pe Ell is covered by large swaths of forest, most of it owned by Weyerhaeuser and harvested for lumber.

The majority of the watershed is rain-dependent, with only the Wynoochee and Satsop Rivers having some summer impact from delayed snowmelt in the Olympic mountains. As with the rest of Western Washington, summer is considered the ‘dry season’ with precipitation dropping close to zero and flows averaging less than 2,000 cubic feet per second (cfs) at Montesano from June through October. The rainy season usually begins in November, increasing average flow to 8,000 cfs, and increasing to 13,000 cfs from December through February. Spring flows steadily drop through May (Chehalis Basin Partnership).

The Chehalis area, as with most of western Washington, enjoys mild weather:

The lower fifteen miles of the Chehalis are tidally influenced, but during extreme (“king”) tides there is anecdotal evidence of tidal variation as far as Porter, 30 miles upstream of the mouth. On incoming tides with eastern winds, the surface water can reverse course and head upstream, particularly when the river is low in the summer. Tidal variations at Montesano range from lows of -2.4 feet in June and July to highs of 10.6 in January (NOAA).

The Chehalis River area is plentiful in natural, cultural, and economic resources, all at risk of injury from oil spills. Potential oil spill risks include, but aren’t limited to, road transportation, rail transportation, facilities and oil pipelines, aircraft, and recreational boating,. This section briefly discusses these risks and how they could impact the Chehalis River GRP planning area.

This section provides a summary of natural, cultural, and economic resources at risk in the Chehalis River area. It provides general information on habitat, fish, and wildlife resources, and locations in the area where sensitive natural resource concerns exist. It offers a summary of cultural resources that include fundamental procedures for the discovery of cultural artifacts and human skeletal remains. General information about flight restrictions, hazing, and oiled wildlife can be found near the end of this section. A list of economic resources in the area is provided in the section’s appendix.

Most biological communities are susceptible to the effects of oil spills. Plant communities on land, eelgrass and marsh grasses in estuaries, and kelp beds in the ocean; microscopic plants and animals; and larger animals, such as fish, amphibians and reptiles, birds, mammals, and a wide variety of invertebrates, are all potentially at risk from smothering, acute toxicity, and/or the chronic long-term effects that may result from being exposed to spilled oil. 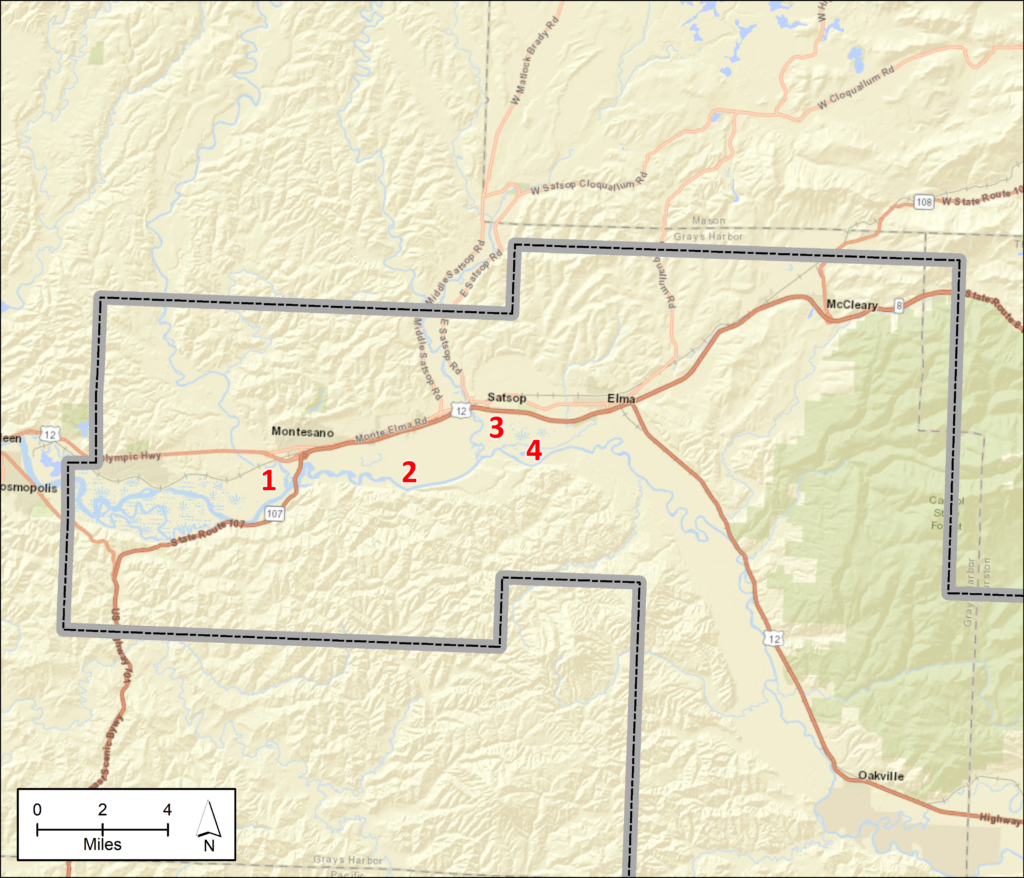 Culturally sensitive sites are present within the Chehalis River area. Due to the sensitive nature of this information, details regarding the location and type of cultural resources present are not included in this document. However, in order to ensure that tactical response strategies do not inadvertently harm historical and culturally sensitive sites, Washington Department of Archeology and Historic Preservation (WDAHP) should be consulted before disturbing any soil or sediment during a response action. WDAHP may assign a person to monitor cleanup operations, or provide a list of professional archeologists that can be contracted to monitor response activities.

Socio-economic sensitive resources are facilities or locations that rely on a body of water to be economically viable. Because of their location, they could be severely impacted if an oil spill were to occur. Economically sensitive resources are separated into three categories: critical infrastructure, water dependent commercial areas, and water dependent recreation areas. Appendix “6A” of this section provides a list of economic resources for this GRP area.

Flight restriction zones: Flight restriction zones may be recommended by the Environmental Unit (Planning Section) for the purpose of minimizing disturbance that could result in injury to wildlife during an oil spill. By keeping a safe distance or altitude from identified sensitive areas, pilots can minimize the risk of aircraft/ bird collisions, prevent the accidental hazing of wildlife into oiled areas, and avoid causing abandonment of nests. Implementation of Flight Restriction Zones will take place within the Air Operations Branch (Operations Section) after a Unified Command is formed. The Planning Section’s Environmental Unit will work with the Air Ops Branch Director to resolve any potential conflicts with flight activities that are essential to the spill response effort. Typically, the area within a 1,500 ft radius and below 1,000 ft in altitude is restricted to flying in areas that have been identified as sensitive. However, some areas have more restrictive zones. In addition to restrictions associated with wildlife, Tribal authorities may also request notification when overflights are likely to affect culturally sensitive areas within reservations. See Section 9301.3.2 and Section 9301.3.3 of the Northwest Area Contingency Plan for more information on the use of aircraft and helicopters in open water and shoreline responses.