Hood Canal and Puget Sound were sculpted by thick and extensive glaciers that advanced south to just beyond Olympia. Glacial sediments (glacial till and outwash) were deposited during the last 2 million years by numerous glacial advances, the most recent of which was around 15,000 years ago. Glaciers covered the area in several thousand feet of ice. As glaciers moved, sediment was transported by the ice and deposited along the way. This created many of the long and narrow hills and lakes we see in the planning area today (WA DNR).

Puget Sound is a complex estuarine system of four major interconnecting basins, three of which have fjord-like characteristics. The principal entrance from the Strait of Juan de Fuca is at the northern end of Admiralty Inlet, with a much smaller connection through Deception Pass. The three major fjord-like basins include the Main Basin, with an entrance sill located at the northern portion of Admiralty Inlet near Port Townsend; Hood Canal, with its entrance sill at the northern end near the location of the Hood Canal floating bridge; and Southern Sound, which is a complex of two large inlets and numerous smaller inlets and connecting channels. The Southern Sound entrance sill is at The Narrows. In each case sill depths are approximately 73 meters (40 fathoms) and basin depths generally are near or exceed 180 meters (100 fathoms). The fourth basin is the Whidbey Basin, comprised of Possession Sound, Port Susan, Saratoga Passage, and Skagit Bay. Deception Pass is the northern terminus of the Whidbey Basin (Encyclopedia of Puget Sound).

The area has a maritime climate with generally mild but wet winters, and dry and warm summers. The climate is influenced by the Pacific Ocean but is sheltered by the Olympic Mountains. Local climate conditions can vary significantly depending on topographic position and season. Average temperatures range from 32° F in January to 78° F in July. Annual precipitation ranges from an average of less than 30 inches on the northern end of the peninsula to 80 inches around Seabeck-Holly. The “rain shadow” effect created by the Olympic Mountains contributes to this geographic variation in precipitation throughout the County. Typically, 80% of the region’s precipitation falls between October and March.

The mean tidal range for Hood Canal is from 6.4 to 8.1 feet, and the diurnal tidal range is typically from 9.9 to 12.1 feet. In Hood Canal and Puget Sound, the tidal currents gradually weaken farther into Hood Canal, becoming more variable south of Dabob Bay and the Toandos Peninsula. The currents grow in strength around Sisters Point, southeast of the Tahuya River mouth (NOAA 2014).

Hood Canal is plentiful in natural, cultural, and economic resources, all at risk of injury from oil spills. Potential oil spill risks include, but are not limited to, road transportation, rail transportation, waterfront facilities, aircraft, recreational boating, and other oil spill risks. This section briefly discusses these risks in the Hood Canal area (WA Dept. of Ecology 2015).

This section provides a summary of natural, cultural, and economic resources at risk in the planning area. It provides general information on habitat, fish, and wildlife resources, and locations in the area where sensitive natural resource concerns exist. It offers a summary of cultural resources that include fundamental procedures for the discovery of cultural artifacts and human skeletal remains. General information about flight restrictions, wildlife deterrence, and oiled wildlife can be found near the end of this section. A list of economic resources in the area is provided in the section’s appendix. 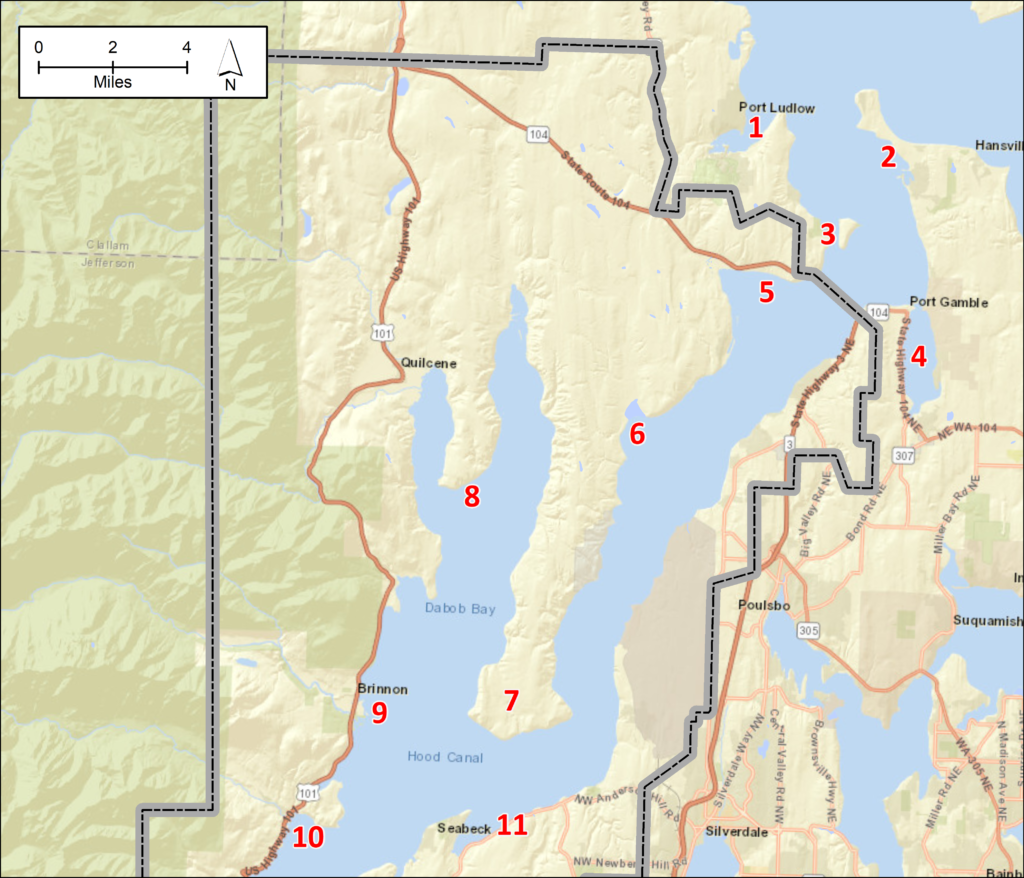 Socio-economic sensitive resources are facilities or locations that rely on a body of water to be economically viable. Because of their location, they could be severely impacted if an oil spill were to occur. Economically sensitive resources are separated into three categories: critical infrastructure, water dependent commercial areas, and water dependent recreation areas. Appendix 6A of this section provides a list of economic resources for this planning area.

Flight restriction zones: Flight restriction zones may be recommended by the Environmental Unit (Planning Section) for the purpose of minimizing disturbance that could result in injury to wildlife during an oil spill. By keeping a safe distance or altitude from identified sensitive areas, pilots can minimize the risk of aircraft/bird collisions, prevent the accidental hazing of wildlife into oiled areas, and avoid causing the abandonment of nests.