Lake Washington is a long, narrow, finger-shaped lake that’s approximately 22 miles long (north to south) and less than 2 miles wide near the middle (east to west). The lake has a surface area
of about 34 square miles, and an average depth of 108ft. The deepest part of the lake is reported to be 214ft. The water level in Lake Washington is regulated by the Hiram M. Chittenden Locks in Ballard (Seattle). Water levels in the lake vary within a couple of feet seasonally, but usually measure 16ft above mean sea level (Puget Sound) and 21ft above mean lower tide. The lake connects to Puget Sound (to the west) by way of the Lake Washington Ship Canal and the Chittenden Locks.

Lake Washington has two major influent streams; the Cedar and Sammamish Rivers. The Cedar River at the southern end of the lake contributes about 57 percent of the annual runoff while
the Sammamish River on the north end contributes about 27 percent. Total annual flow is approximately 41 percent of the lake volume. Residence time is about 2.4 years. Lake Washington drains westward through Lake Union and the Ship Canal to Shilshole Bay in Puget Sound via the Chittenden Locks in Ballard. Lake Washington’s water level elevation varies by season, but is typically about 16ft above mean sea level (Puget Sound) and 21ft above mean lower tide.

Seattle’s climate is usually described as oceanic or temperate marine; winters are typically mild and wet while summers are usually warm and dry. Temperature extremes are moderated by
the adjacent Puget Sound, greater Pacific Ocean, and Lake Washington. The region is largely denied pacific storms by the Olympic Mountains and cold arctic air by the Cascade Range. Despite being on the margin of the rain shadow of the Olympic Mountains, the Seattle area has a reputation for frequent rain. Records show that Seattle is usually cloudy more than 200-days
per year, and partly cloudy more than 90-days annually.

Lake Washington is not impacted by tides, and no information on current flow in the lake is available (seasonal current flows or otherwise).

Lake Washington is plentiful in natural, cultural, and economic resources, all at risk of injury from oil spills. Potential risks to sensitive resources in the area include, but aren’t limited to, oil
pipelines, road transportation, vessel traffic, and aircraft. This section briefly discusses these
risks in the Lake Washington GRP area.

This section provides a summary of natural, cultural, and economic resources at risk in the Lake Washington area. It provides general information on habitat, fish, and wildlife resources, and
locations in the area where sensitive natural resource concerns exist. It offers a summary of cultural resources that include fundamental procedures for the discovery of cultural artifacts
and human skeletal remains. General information about flight restrictions, hazing, and oiled wildlife can be found near the end of this section. A list of economic resources in the area is provided as an appendix.

The Lake Washington basin includes a wide variety of aquatic, riparian, and upland habitats. The area provides habitat to all of Washington’s salmonid species and affords a variety of habitat to
many bird species as well. These varied habitats support a complex diversity of wildlife species, including large and small mammals; passerine birds, raptors, upland birds, and waterfowl; reptiles; and amphibians. Some species are resident throughout the year; others are migratory either within the sub basin or, in many cases, seasonally migrate outside the sub basin. Populations of certain species are fragile and their future presence in the sub basin will require improved information and decisive management actions. Many wildlife species found in the sub
basin are classified as threatened, endangered, sensitive, or of special concern under the federal Endangered Species Act or Washington State guidelines.

The lower sections of tributaries that drain to Lake Washington are usually sensitive. They provide good habitat for the rearing of juvenile salmonids and support concentrations of migratory and wintering birds. Upstream areas are home to a large variety of wildlife, including fish and waterfowl. They contain wetlands within heavily developed urban areas. Public parks, private lands, and recreational areas surround the lake. Specific areas of concern are listed below and depicted on the map in the next section. The number that precedes the area name in the list (below) directly relates to the numbered area on the map. 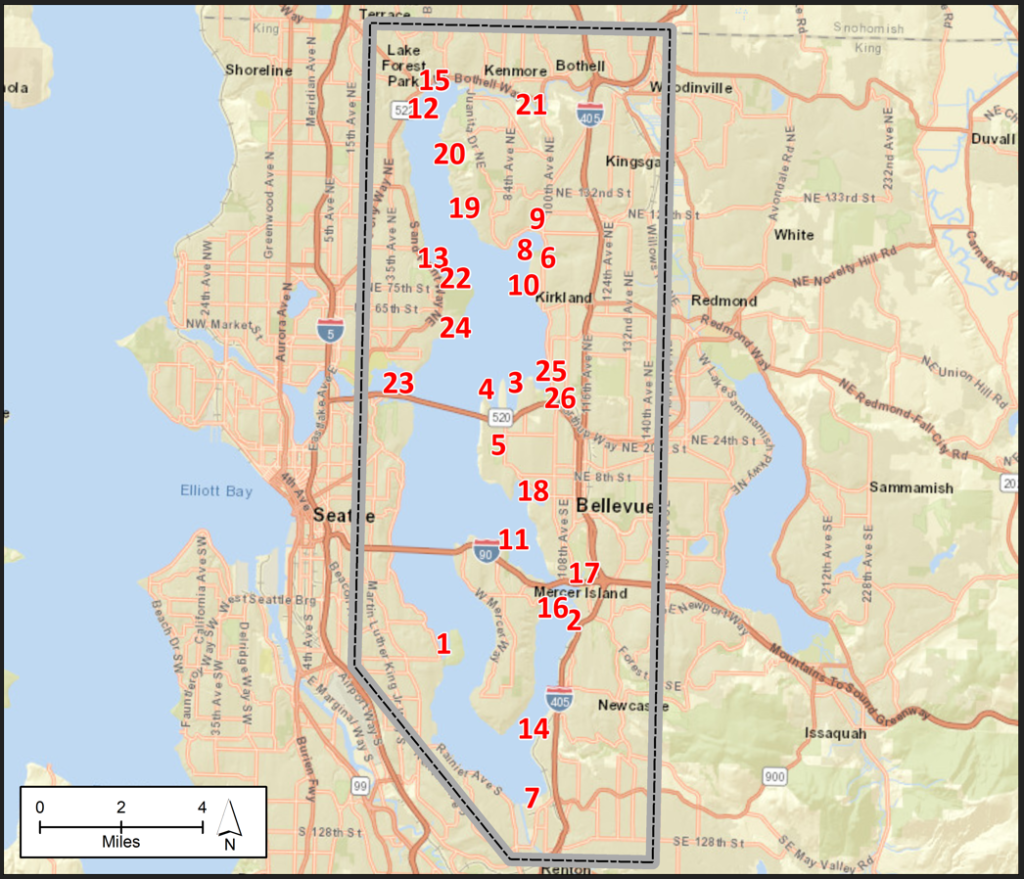 Culturally sensitive sites are present within the Lake Washington area. Due to the sensitive nature of this information, details regarding the location and type of cultural resources present are not included in this document. However, in order to ensure that tactical response strategies do not inadvertently harm historical and culturally sensitive sites, Washington Department of
Archeology and Historic Preservation (WDAHP) should be consulted before disturbing any soil or sediment during a response action. WDAHP may assign a person to monitor cleanup operations, or provide a list of professional archeologists that can be contracted to monitor response activities.

Socio-economic sensitive resources are facilities or locations that rely on a body of water to be economically viable. Because of their location, they could be severely impacted if an oil spill were to occur. Economically sensitive resources are separated into three categories: critical infrastructure, water dependent commercial areas, and water dependent recreation areas. Appendix “Economic Resources at Risk” in the Table of Contents provides a list of economic resources for this GRP area.

Flight Restriction Zones: Flight restriction zones may be recommended by the Environmental Unit (Planning Section) for the purpose of minimizing disturbance that could result in injury to wildlife during an oil spill. By keeping a safe distance or altitude from identified sensitive areas, pilots can minimize the risk of aircraft/ bird collisions, prevent the accidental hazing of wildlife into oiled areas, and avoid causing abandonment of nests or marine mammal pupping areas. Implementation of Flight Restriction Zones will take place within the Air Operations Branch (Operations Section) after a Unified Command is formed. The Planning Section’s Environmental Unit will work with the Air Ops Branch Director to resolve any potential conflicts with flight activities that are essential to the spill response effort. Typically, the area within a 1,500 ft radius and below 1,000 ft in altitude is restricted to flying in areas that have been identified as sensitive. However, some areas have more restrictive zones. In addition to restrictions associated with wildlife, Tribal authorities may also request notification when overflights are likely to affect culturally sensitive areas within reservations. See Section 9301.3.2 and Section 9301.3.3 of the Northwest Area Contingency Plan for more information on the use of aircraft and helicopters in open water and shoreline responses.