This section provides a description of the area’s physical features, hydrology, climate and winds, and includes an overview of oil spill risks in the Lower Columbia River area. The planning area includes a 145 mile section of the Columbia River from the Bonneville Dam to the estuary at the river mouth. Also included is the lower Willamette River, which is a 26 mile reach from the Willamette Falls at West Linn/Oregon City, Oregon to the confluence with the Columbia at Portland’s most northern point. The Columbia River travels 1,243 miles, originating in British Columbia, Canada and running through Washington, serving as the border between Washington and Oregon before eventually entering the Pacific Ocean. The NOAA river mile system used in this GRP begins at the confluence of the river with the Pacific. The Lower Columbia River GRP starts at river mile one and ends at the base of the U.S. Army Corps of Engineers (USACE) Bonneville Lock and Dam located at river mile 145. Upstream to downstream, the Columbia River in this planning area passes through the towns and cities of North Bonneville (WA), Skamania (WA), Corbett (OR), Washougal (WA), Troutdale (OR), Camas (WA), Fairview (OR), Gresham (OR), Vancouver (WA), Portland (OR), St. Helens (OR), Ridgefield (WA), Columbia City (OR), Kalama (WA), Prescott (OR), Rainier (OR), Longview (WA), Kelso (WA), Cathlamet (WA), Astoria (OR), Chinook (WA), Warrenton (OR), and Ilwaco (WA). The planning area falls in 5 Washington counties (Skamania, Clark, Cowlitz, Wahkiakum and Pacific) and 4 Oregon counties (Multnomah, Columbia, Clatsop and Clackamas). In Washington, it includes portions of Water Resource Inventory Area (WRIA) 24 (Willapa), WRIA-25 (Grays-Elochoman), WRIA-26 (Cowlitz), WRIA-27 (Lewis), and WRIA-28 (Salmon-Washougal).

The lower portion of the Columbia River contains an extensive variety of fish, wildlife, and habitat. It is also subject to much industrial use along its shorelines, and accommodates large commercial vessels and significant other vessel traffic. As a result, this area is highly vulnerable to environmental damage by oil or hazardous materials spills.

In contrast to the Middle Columbia River GRP just to the east of the Bonneville Dam, the Lower Columbia River’s planning area hydrology is more dynamic due to the confluence with the ocean and the lack of controls seen in the static pools upstream. The Bonneville Pool rests at an average elevation of 76.5 feet above mean sea level during normal dam operations. The water’s transition from the pool through the spillways of the Bonneville Dam mark the farthest upstream reach of this GRP. In terms of hydrologic flow, the dam is the only manmade control point on the lower section on the Columbia River (not including its tributaries). From the dam, river flow travels down unimpeded to sea level, where it meets the ocean. This flow is made up of drainage for approximately 258,000 sq. miles of the Western United States and British Columbia (USGS). The confluence of the saltwater and freshwater ecosystems in the Columbia River delta mouth creates a dynamic transitory zone that is dictated by tides and current. The implication of this interaction is discussed further in Section 2.5. The average yearly discharge at the mouth of the river is around 244 billion cubic meters.

The entire coast is characterized by a maritime climate with cool summers and mild winters. Air temperatures are in the mid 40s in the winter and the low 60s in the summer. The temperature increases inland, with Portland having an average high in the upper 70s during the summer and upper 40s in the winter. Water temperatures are fairly constant, normally in the low 50’s. Annual rainfall varies between Astoria and Portland. Astoria averages 67.26” per year and Portland averages 36.03” per year (Astoria Regional Airport, OR US; Portland International Airport, OR US).

Water levels and velocities in the Lower Columbia River are a function of several factors: seasonal runoff, tidal effects, and the volume of water released by upstream dams.

This section provides a summary of natural, cultural, and economic resources at risk in the vicinity of the Lower Columbia River, downstream of the Bonneville Dam. It provides general information on habitat, fish, and wildlife resources, and locations in the area where sensitive natural resource concerns exist. It offers a summary of cultural resources that include fundamental procedures for the discovery of cultural artifacts and human skeletal remains. A list of cultural and economic resources in the area can be found in Sections 6.3 and 6.4. General information about flight restrictions, wildlife deterrence, and oiled wildlife is available in Section 6.5.

This area contains a wide variety of aquatic, riparian, and upland habitats, and nearshore marine (outer coast from the mouth of the river to Seaview, WA) areas. These habitats support many of Washington’s salmonid species as well as a complex diversity of other wildlife. In addition to those species directly at risk to oil spills, others (due to their life histories and/or behaviors) are unlikely to become directly oiled during a spill incident but may be disturbed by other operations such as cleanup, reconnaissance, or fire suppression activities. Some of the bird species are resident throughout the year, but many others seasonally migrate through the area. 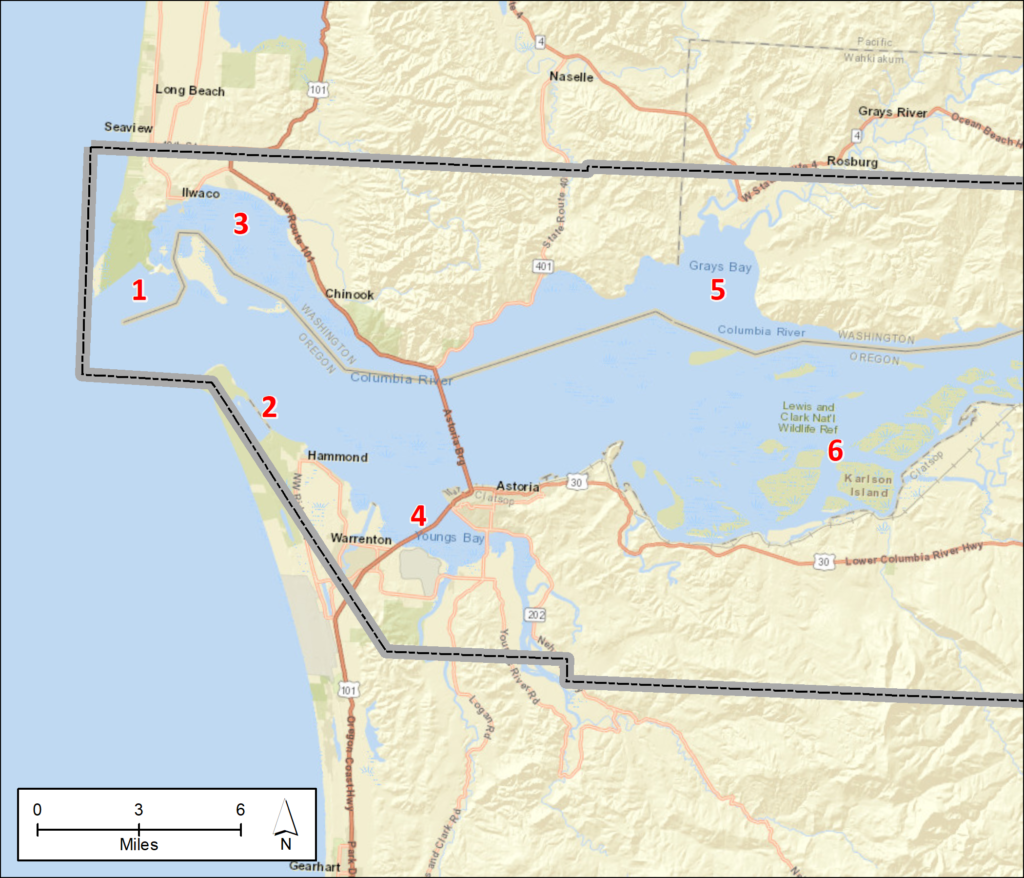 Tribal and recreational fisheries targeting species such as salmon and steelhead are important to area and local economies.