This section provides an overview of the area’s physical features, hydrology, climate and winds, and tides and currents in the Lower Skagit River GRP planning area, and an oil spill risk assessment in Section 2.6.  The southernmost portion of the planning area begins in Snohomish County, along Big Fisher Creek and the I-5 corridor.  It continues at an angle parallel to the coast, crossing the forks and sloughs of the Skagit River delta about a mile from open water and mudflats.  Headed northeast upstream from the coast, the various sloughs and forks merge to become the main stem of the Skagit River near the historical site of Skagit City at River Mile (RM) 7.  From there the main stem heads generally north, winding through the city of Mt. Vernon for five or so miles and forming the southern border of the City of Burlington (RM 16).  The river continues to the northeast along the southern edge of Sedro-Woolley and out of the planning area at RM 25.  Some of the tributaries in this area include Gages Slough, which travels through Burlington, Big Fisher Creek draining out of Snohomish County, and sloughs in the Skagit Delta including Fisher Slough, Freshwater Slough, Tom Moore Slough and Dry Slough.  The planning area covers about 150 square miles and fully resides within Water Resource Inventory Area Lower Skagit/Samish (WRIA 3).  The communities of Avon, Burlington, Conway, Mount Vernon and Sedro-Woolley are located within the boundaries of this planning area, as well as portions of Skagit and Snohomish Counties.

The LSKAR-GRP focuses only on the furthest downstream portion of the river, from river mile 25 near Sedro-Woolley to the delta one to two miles upstream from Skagit Bay.  The Skagit River stretches much further than the area addressed in this plan, stretching an additional 100 miles northwest into Canada.  The full basin covers over 3,000 square miles of the North Cascades and includes the Baker River, Sauk River, Suiattle River, and many other tributaries (HSRG). The 22-mile long Ross Lake was created by building a hydroelectric dam on the Skagit River in the 1940s, located 20 miles south of Canada (Ross Lake Resort 2014).  Diablo Lake and Gorge Lake likewise were created by two lower hydroelectric dams, completed in 1924 and 1961, respectively.  Combined, the three dams on the Skagit provide a quarter of the power used by Seattle (Wilma 2003).

The Skagit River drains the North Cascade range and experiences high volumes of precipitation in the fall and winter, but the peak flows are in late spring and early summer from glaciers and mountain snowmelt.  To a limited extent, controlled discharges for energy generation from the three dams on the Skagit River even out river flows and reduce the chance of flooding in lower lying areas.  Because of the agricultural nature of the lower Skagit watershed, water levels in the valleys downstream of Sedro-Woolley are used for irrigation in the summer.  There is one USGS station in the planning area tracking velocity and river height, located in Mount Vernon at river mile 15.7 between the I-5 Bridge and the BNSF rail bridge.  This gage shows that highest flows are from May to July, with average flow from 20,100 cubic feet per second (cfs) to 24,300 cfs in June, and a monthly low of 9,390 cfs in September (USGS).

The flow speed on the main fork of the Skagit at the Mount Vernon gage (river mile 15.7) is 2.25 miles per hour (mph) at the annual mean velocity of 16,610 cfs.  Each portion of the river will have faster or slower speeds based on a variety of factors, including channel width, channel depth, debris blockages, incoming or outgoing tides, and elevation change, among others.  In low and average flows, the North Fork carries about 60% of the flow while 40% enters the South Fork.  In high water, the split is close to 50%.  Sloughs and side channels will have significantly lower flow speeds commensurate with their channel width, depth, tidal influence, and vegetation.

The Skagit River area is plentiful in natural, cultural, and economic resources, all at risk of injury from oil spills.  Potential oil spill risks include, but are not limited to, road transportation, rail transportation, oil pipelines, aircraft, recreational boating, and other oil spill risks.  This section briefly discusses these risks and how they could impact the GRP planning area. 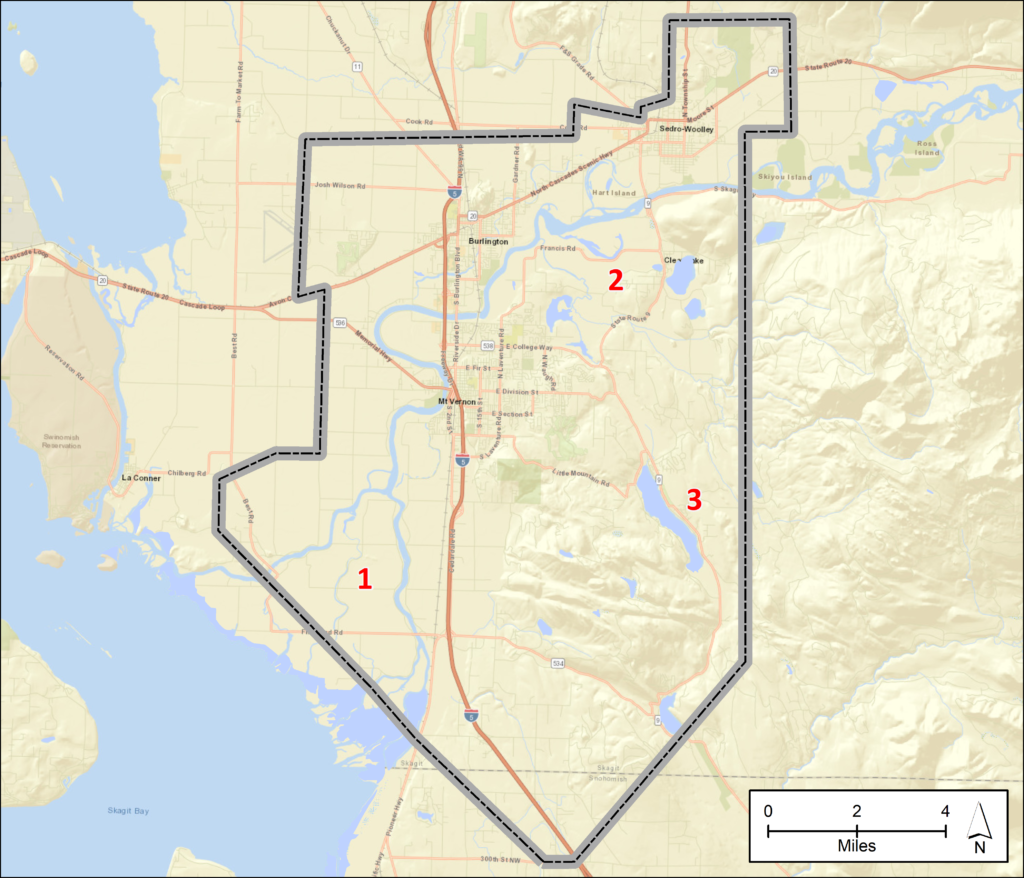 Socio-economic sensitive resources are facilities or locations that rely on a body of water to be economically viable. Because of their location, they could be severely impacted if an oil spill were to occur. Economically sensitive resources are separated into three categories: critical infrastructure, water-dependent commercial areas, and water-dependent recreation areas. An appendix provides a list of economic resources for this GRP area.