This section provides an overview of the area’s physical features, hydrology, climate and winds, and tides and currents in the Lower Yakima River GRP planning area, and an oil spill risk assessment in Section 2.6. The Lower Yakima River GRP boarders the Middle Columbia River McNary Pool GRP to the southeast, and the proposed Upper Yakima River GRP to the northwest. From the Highway I-182/US 12 Bridge at river mile (RM) 4.25 in West Richland, the planning area follows the Yakima River upstream to RM 131.25, above the Roza Diversion Dam at RM 128. The planning area covers about 676 square miles and resides within Water Resource Inventory Area Rock-Glade (WRIA 31), Lower Yakima (WRIA 37), Naches (WRIA 38), Upper Yakima (WRIA 39), and Alkali-Squilchuck (WRIA 40). The communities of Benton City, Grandview, Granger, Moxee, Prosser, Selah, Union Gap, Wapato, West Richland, and Yakima are located within the boundaries of this planning area, as well as the northeastern corner of reservation lands for the Yakama Nation, and portions of Benton, Kittitas, and Yakima counties.

The physical features of the area now known as eastern and central Washington and Oregon were greatly influenced by volcanic activity, which built up a stratum of mud, ash, and lava in the geologic column during the Eocene (55.8-33.9 million years ago), Oligocene (33.9-23 million years ago), and Miocene (23-5.3 million years ago) Epochs (UC Museum of Paleontology, 2011). Basalt flows, known as the Columbia River Basalt Group, then covered the area in layers, forming a strong foundation of basaltic rock at least one mile thick (Foster 2008).  Subsequent lava and ash eruptions raised the Cascade Mountains during the Miocene Epoch, after which the mountains began to lift, when hundreds of volcanoes erupted during the Pleistocene Epoch (2.6 million – 11,700 years ago). As the mountains rose, the Yakima, Snake, and Columbia Rivers carved out deep gorges. Towards the end of the Pleistocene (~16,000-14,000 years ago) the Missoula floods battered these gorges over 100 times when the glacial dam forming Glacial Lake Missoula was repeatedly breached, releasing high velocity debris-filled waters to a height of 900 feet and scouring the landscape with a discharge of 10 million cubic feet per second (Lee 2009). This series of events has been described as one of the greatest flood occurrences in the history of the earth (WA Military Dept.).

The Yakima River originates in the Cascade Range as an outlet from Keechelus Lake at the Keechelus Dam (~RM 215), about 8 miles southeast of Snoqualmie Pass. Outflows from Bumping, Kachess, Rimrock, and Cle Elum Lakes are also dam controlled, and feed into the Yakima River through tributary rivers and creeks downstream. The dams and lakes (reservoirs) are managed by USBR as part of the larger Yakima Project, which provides irrigation water for a narrow strip of fertile land that extends for 175 miles on both sides of the Yakima River. The irrigable lands presently being served total approximately 464,000 acres. The total water holding capacity among the five reservoirs is 1,065,670 acre-feet (USBR 2016).  Water is typically stored in the reservoirs during winter months and released in the summer, reducing or contributing to water flow in the Yakima River. Mountain snowpack, known as the “sixth reservoir,” also plays a crucial role in recharging the lakes during warmer periods.

Although there are no tidally influenced locations within this planning area, the dramatic difference in seasonal precipitation has historically created large swings in flow rates in the Yakima and Naches Rivers which, in turn, influence river currents. The Yakima River’s flow is now moderated by the presence of reservoirs, dams, and other irrigation infrastructure (USBR 1999). The reservoirs managed by the Yakima Project have reduced winter flows by storing water within lake reservoirs, and have increased summer flow rates by releasing water back into the river. From spring through fall, diversion dams and other irrigation measures are used extensively on the river to direct the flow of water. USBR and local irrigation districts determine when and how much water is allowed to pass through any given area. The lowest flow rates on the Yakima River typically occur during the late summer, autumn, and winter months. Higher flows usually occur during the spring snow melt (USBR 1999).

The Lower Yakima River is plentiful in natural, cultural, and economic resources, all at risk of injury from oil spills. Potential oil spill risks include, but are not limited to, road transportation, rail transportation, aircraft, recreational boating, and other oil spill risks. This section briefly discusses these risks and how they could impact this planning area.

This section provides a summary of natural, cultural, and economic resources at risk in the planning area. It provides general information on habitat, fish, and wildlife resources, and locations in the area where sensitive natural resource concerns exist. It offers a summary of cultural resources that include fundamental procedures for the discovery of cultural artifacts and human skeletal remains. General information about flight restrictions, wildlife deterrence, and oiled wildlife can be found near the end of this section.

Most biological communities are susceptible to the effects of oil spills. Plant communities on land, aquatic plants; microscopic plants and animals; and larger animals, such as fish, amphibians and reptiles, birds, mammals, and a wide variety of invertebrates, are all at potentially at risk from smothering, acute toxicity, and/or the chronic long-term effects that may result from being exposed to spilled oil.

The Yakama Nation, irrigation infrastructure, private lands, and recreational areas are located within the YAK-GRP planning area. Specific areas of concern are listed below and depicted on the map in Figures 1-4. The number preceding the area name in the list below relates to the numbered area on the map. 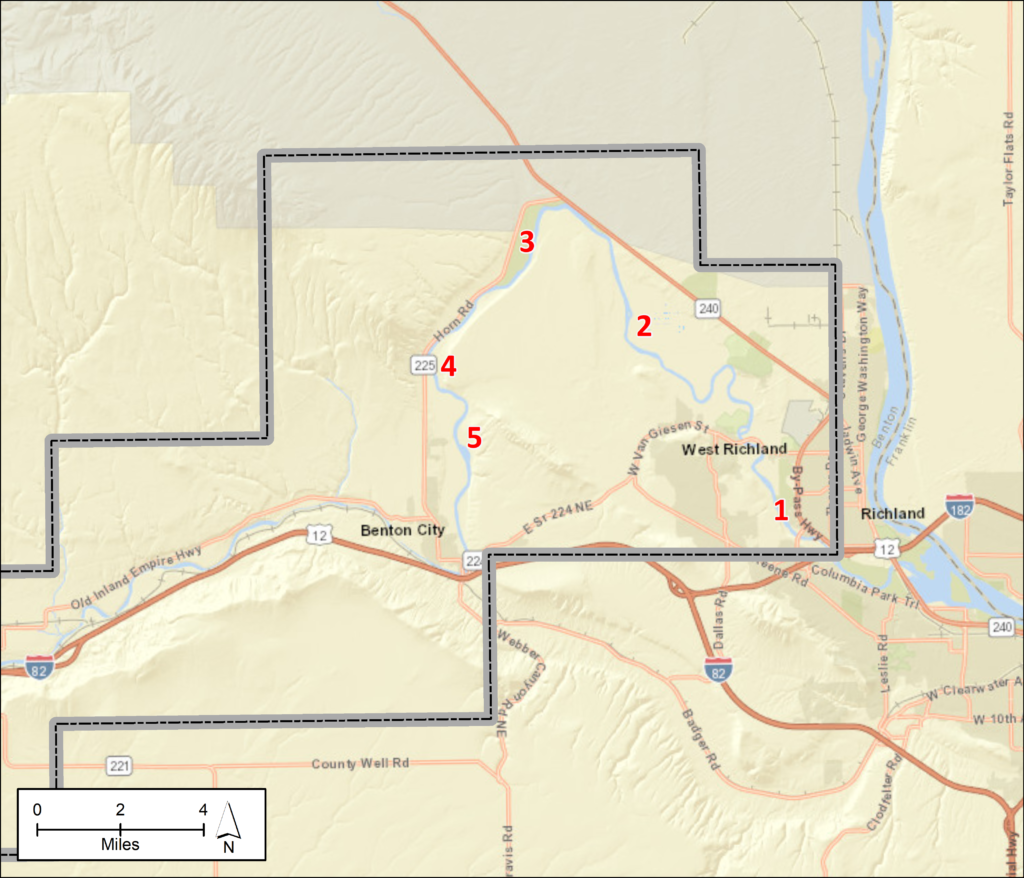 Culturally significant resources are present within the planning area. Information regarding the type and location of cultural resources is maintained by the Washington Department of Archeology and Historic Preservation (WDAHP). This sensitive information is made available to the Washington Department of Ecology for oil spill preparedness and response planning. The Tribal Historic Preservation Offices (THPOs) or Cultural Resource Departments of local tribes (see table 6-1) may also be able to provide information on cultural resources at risk in the area and should be contacted, along with WDAHP, through normal trustee notification processes when significant oil spills, or smaller spills above reportable thresholds, occur in the area.