This chapter provides a description of the physical features, hydrology, climate, and winds, found along the Middle Columbia River (MCR) corridor and includes an overview of the oil spill risks in the region. The Columbia River travels 1,243 miles, originating in British Columbia, Canada and running through Washington, providing a border between Washington and Oregon before eventually entering the Pacific Ocean. Although the Columbia River originates in Canada, the NOAA river mile system used in these geographic response plans (GRPs) begins at the confluence of the river with the Pacific. The Lower Columbia River Geographic Response Plan (LCR-GRP) starts at river mile one and ends at the base of the U.S. Army Corps of Engineers (USACE) Bonneville Lock and Dam located at river mile 145.4. The Middle Columbia Region begins at river mile 145.4 on the upstream side of the Bonneville Lock and Dam and is subdivided into four separate GRPs, each a specific pool created by one of four USACE dams in the region: Bonneville, The Dalles, John Day, and McNary.

Volcanic activity built up a stratum of mud, ash, and lava in the geologic column in the area now known as eastern and central Washington and Oregon during the Eocene (55.8-33.9 million years ago), Oligocene (33.9-23 million years ago), and Miocene (23-5.3 million years ago) Epochs (UCMP). Basalt flows then covered the area in layers, forming a strong foundation of basaltic rock. Subsequent lava and ash eruptions raised the Cascade Mountains during the Miocene Epoch, and the mountains began to lift when hundreds of volcanoes erupted during the Pleistocene Epoch (2.6 million – 11,700 years ago).

The Columbia River is the fourth largest river in North America and the largest in the Pacific Northwest. It originates in Columbia Lake, high in the Canadian Rockies, where it first travels northwest, and then turns south entering the United States in Washington, where it eventually turns west and forms the border between Washington and Oregon before flowing into the Pacific Ocean (USGS). The river travels a total of 1,243 miles, providing drainage for approximately 258,000 square miles of the Western United States and British Columbia, with numerous tributaries, both rivers and creeks, adding to the flow along the way (USGS).

The West-East corridor of the Columbia Gorge through the Cascade mountain range creates a climate interaction between the Washington/Oregon coasts and the interior of the states. Due to the geologic formations and the atmospheric pressure imbalance surrounding this area, strong wind is frequently channeled through the Gorge year round. These conditions, in addition to the scenic surroundings, have made the Gorge a renowned sporting destination for windsurfing (USACE). In the summer, the wind comes predominately from the west. During the winter it oscillates between easterly and westerly directions. This channeled wind is a conduit for air temperature in the surrounding regions as it funnels warm maritime air inland, and cold interior wind towards the coast.

There are no tidally influenced areas within the MCR area. The river’s flow is governed strictly by the various dams, with the USACE determining exactly when and how much water is allowed to pass through the spillways; there are no free-flowing waters.

The Middle Columbia River is plentiful in natural, cultural, and economic resources, all at risk of injury from oil spills. Potential oil spill risks include, but aren’t limited to commercial vessel traffic, road systems, rail transportation, aircraft, recreational boating, and other oil spill risks. This section briefly discusses these risks and how they could impact the GRP planning area.

This area contains a wide variety of aquatic, riparian, and upland habitats. These habitats support many of Washington’s salmonid species as well as a complex diversity of other wildlife. In addition to those species directly at risk to oil spills, others (due to their life histories and/or behaviors) are unlikely to become directly oiled during a spill incident but may be disturbed by response operations such as cleanup and reconnaissance. Some of the bird species are resident throughout the year, but many others seasonally migrate through the area. 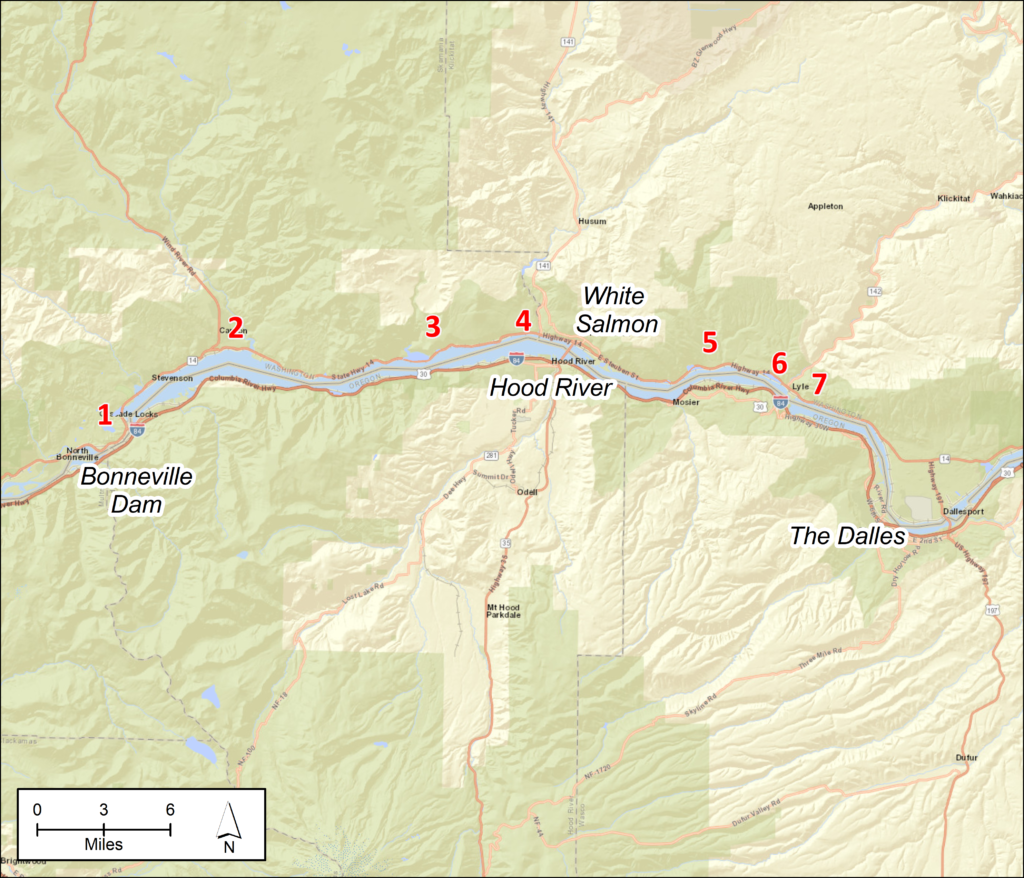 Figure 1: Geographic areas of concern on the Columbia River, between the Bonneville and The Dalles Dams. See text for detailed site descriptions.

Socio-economic sensitive resources are facilities or locations that rely on a body of water to be economically viable. Because of their location, they could be severely impacted if an oil spill were to occur.  Economically sensitive resources are separated into three categories: critical infrastructure, water dependent commercial areas, and water dependent recreation areas. The appendix provides a list of economic resources for this GRP area.