This section provides a description of the area’s physical features, hydrology, climate and winds, and includes an overview of oil spill risks in the Moses Lake / Crab Creek area. The planning area includes all of Moses Lake and Rocky Ford Creek, and 136 miles of Crab Creek extending from the Stratford Road bridge in the city of Moses Lake upstream to the creek’s crossing at State Highway 2 about 2.7 miles west of Reardon. Upstream to downstream, Crab Creek passes through the towns or cities of Odessa, Irby, Krupp, Wilson Creek, Stratford, and Moses Lake. The planning area fully resides within the limits of Grant and Lincoln counties, and includes portions of Water Resource Inventory Area 41 (WRIA-41, Lower Crab), WRIA-42 (Grand Coulee), and WRIA-43 (Upper Crab-Wilson).

Moses Lake and Crab Creek lie within the Channeled Scablands of east-central Washington, a complex of “vein-like” channels, rock basins, broad coarse‑grained alluvial deposits, and loess islands created by a series of cataclysmic Pleistocene mega-floods (Baker 2008). The floods originated from the margins of the Cordilleran Ice Sheet, particularly Lake Missoula in Montana and scoured prominent pathways into the base geology of the Columbia River Basalt Group (Bretz 1927; Baker 1973).  Crab Creek flows through one of these scoured pathways. Grand Coulee is another channel where large volumes of flowing water scoured a channel about 1 mi wide. As the flood waters discharged from Grand Coulee and entered the Quincy basin, a structurally controlled depression in central Washington, flood-entrained sediment dropped from suspension and bed-load, thereby emplacing the alluvial Ephrata Fan. The Ephrata Fan is composed of boulders and larger clasts at its northern extent near Grand Coulee and fines progressively southward from boulders to sands and finer material (Magirl et al 2010).

Moses Lake is shallow with an average depth of 18 ft and a maximum depth of 38 ft under full-pool conditions. The surface area of the lake is 6,800 acres (Magril et al 2010). Surface discharge from Moses Lake is controlled by two dams operated by U.S. Bureau of Reclamation (USBR), both located at the southern end of the lake and used to convey water from the East Low Canal to Potholes Reservoir. The lake surface elevation is manipulated by the USBR throughout the year for irrigation management. Just prior to the irrigation season (normally in mid-March) the lake level is set to an elevation of approximately 1046-1047 feet above mean sea level (AMSL), and remains there throughout the summer. At the end of the irrigation season (typically late October) the lake level is lowered to approximately 1041 feet AMSL to create storage capacity for winter/early spring runoff, and to protect and allow maintenance of shoreline structures (Pitz 2003). Two main surface tributaries drain to Moses Lake: Rocky Ford Creek to the main arm, and Crab Creek into Parker Horn.

The Moses Lake/Crab Creek GRP planning area falls within the Central Basin region of Washington, which has the lowest precipitation rates in Washington State. Annual precipitation averages around 7 inches. Precipitation is commonly associated with summer thunderstorms and winter rains and snowfall. Snowfall depths rarely exceed 8 to 15 inches and occur from December through February. High temperatures in January can range from 30F to 40F degrees with low temperatures between 15F to 25F degrees. Summer high temperatures are usually in the lower 90s (F) with low temperatures in the upper 50s (F) (Anchor QEA, LLC 2013). The Central Basin is subject to “chinook” winds which produce a rapid rise in temperature.

Waters within the Moses Lake/Crab Creek GRP planning area are not influenced by tides or tidal currents.

The Moses Lake/Crab Creek area is plentiful in natural, cultural, and economic resources, all at risk of injury from oil spills. Potential oil spill risks include, but aren’t limited to, road transportation, rail transportation, oil pipelines, aircraft, recreational boating, and other oil spill risks. This section briefly discusses these risks and how they could impact the Moses Lake and the greater GRP planning area.

This section provides a summary of natural, cultural, and economic resources at risk in the Moses Lake/Crab Creek area. It provides general information on habitat, fish, and wildlife resources, and locations in the area where sensitive natural resource concerns exist. It offers a summary of cultural resources that includes fundamental procedures for the discovery of cultural artifacts and human skeletal remains. General information about flight restrictions, hazing, and oiled wildlife can be found near the end of this chapter. A list of economic resources in the area is provided as a download in the table of contents.

Most biological communities are susceptible to the effects of oil spills. Plant communities on land, eelgrass and marsh grasses in estuaries, and kelp beds in the ocean; microscopic plants and animals; and larger animals, such as fish, amphibians and reptiles, birds, mammals, and a wide variety of invertebrates, are all at potentially at risk from smothering, acute toxicity, and/or the chronic long-term effects that may result from being exposed to spilled oil. 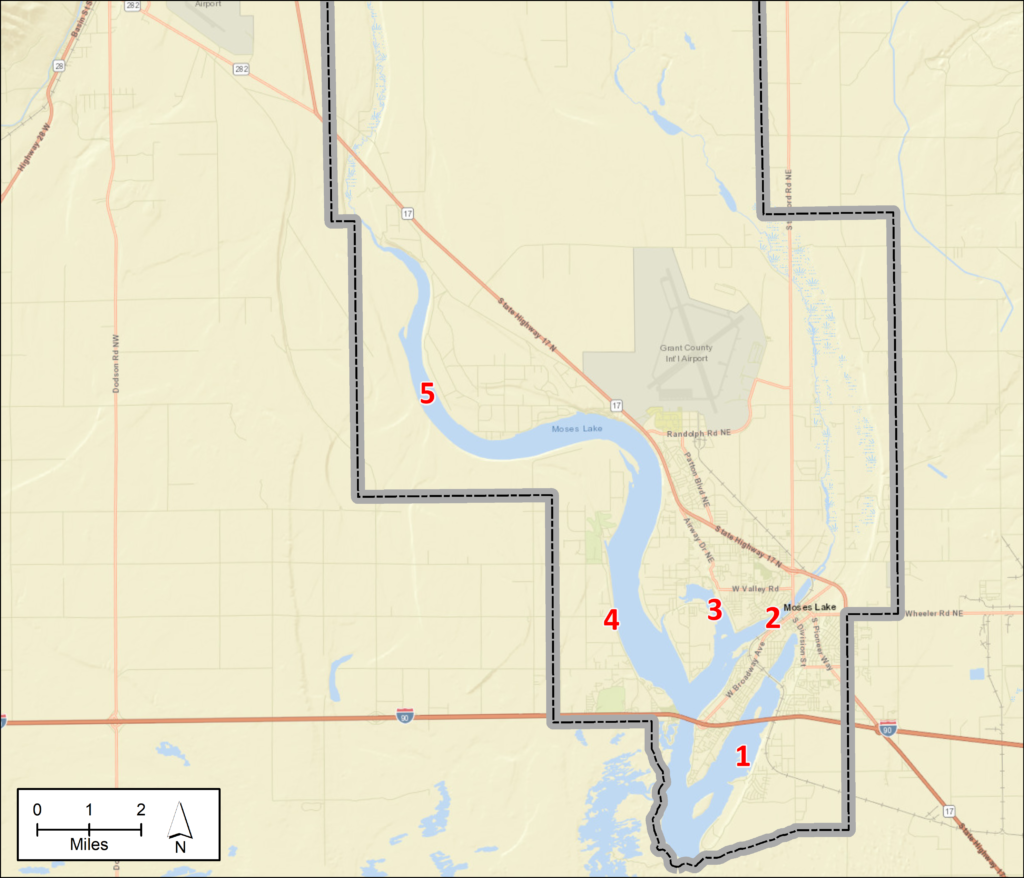 Culturally sensitive sites are present within the Moses Lake / Crab Creek GRP area. Due to the sensitive nature of this information, details regarding the location and type of cultural resources
present are not included in this document. However, in order to ensure that tactical response strategies do not inadvertently harm historical and culturally sensitive sites, Washington
Department of Archeology and Historic Preservation (WDAHP) should be consulted before disturbing any soil or sediment during a response action. WDAHP may assign a person to monitor
cleanup operations, or provide a list of professional archeologists that can be hired to monitor response activities.

Socio-economic sensitive resources are facilities or locations that rely on a body of water to be economically viable. Because of their location, they could be severely impacted if an oil spill were to occur. Economically sensitive resources are separated into three categories: critical infrastructure, water dependent commercial areas, and water dependent recreation areas. Economic Resources at Risk appendix in the Table of Contents provides a list of economic resources for this GRP area.

Flight Restriction Zones: Flight restriction zones may be recommended by the Environmental Unit (Planning Section) for the purpose of minimizing disturbance that could result in injury to wildlife during an oil spill. By keeping a safe distance or altitude from identified sensitive areas, pilots can minimize the risk of aircraft/ bird collisions, prevent the accidental hazing of wildlife into oiled areas, and avoid causing abandonment of nests. Implementation of Flight Restriction Zones will take place within the Air Operations Branch (Operations Section) after a Unified Command is formed. The Planning Section’s Environmental Unit will work with the Air Ops Branch Director to resolve any potential conflicts with flight activities that are essential to the spill response effort. Typically, the area within a 1,500 ft radius and below 1,000 ft in altitude is restricted to flying in areas that have been identified as sensitive. However, some areas have more restrictive zones. In addition to restrictions associated with wildlife, Tribal authorities may also request notification when overflights are likely to affect culturally sensitive areas within reservations. See Section 9301.3.2 and Section 9301.3.3 of the Northwest Area Contingency Plan for more information on the use of aircraft and helicopters during response operations.