The San Juan Islands/ North Puget Sound is bounded by Point Roberts to the north; the southern tip of Lopez Island and Fidalgo Island to the south; Haro Strait to the west; and the mainland of northern Washington to the east (including Boundary Bay, Semiahmoo Bay, Drayton Harbor, Birch Bay, Lummi Bay, Bellingham Bay, Padilla Bay, Burrows Bay).

The San Juan shoreline bordering the exposed areas of Rosario Strait and Haro Strait is comprised mostly of rocky headlands. Contrarily, the beaches open to the inside of the islands are generally sheltered rocky flats. Land in the San Juans is almost all natural, conservancy or rural. State parks and wildlife refuges are located on most of the islands.

Puget Sound is generally a two layer system where the less saline surface water, with freshwater inputs from land, have a net seaward flow, and denser bottom water flows landward. Bottom water currents move southward toward Puget Sound through Rosario Strait. However, bottom water currents move northward through Haro Strait. Surface waters move southward through both straits. The net surface current within the Georgia Strait is towards land, however, it does flow seaward out of Bellingham Bay.

Because Puget Sound is bordered by mountains to the south and east, the strong westerly flow north of the Olympic Mountains is split to the north and south when it reaches the east side of the Sound. Winds in North Puget Sound are generally south, 10 to 20 mph April through May and October through March. During the summer months, they decrease to 0 to 9 mph on average. Local wind conditions may vary.

This section provides a summary of natural, cultural, and economic resources at risk in the planning area.  It provides general information on habitat, fish, and wildlife resources, and locations in the area where sensitive natural resource concerns have been identified.  It offers a summary of cultural resources that include fundamental procedures for the discovery of cultural artifacts and human skeletal remains.  General information about flight restrictions, wildlife deterrence, and oiled wildlife can be found near the end of this section.  A list of economic resources in the area is provided in the appendix.

This area contains a wide variety of aquatic, riparian, and upland habitats that support a complex diversity of wildlife including birds, mammals, fish, and amphibians.  Due to their life histories and/or behaviors, some of these species are unlikely to be directly oiled during a spill incident but may be disturbed by other operations such as cleanup, reconnaissance, or fire suppression activities.  Some of the bird species are resident throughout the year, but many others seasonally migrate outside the basin.  A number of the species found in this area are classified as threatened or endangered under the Federal Endangered Species Act or Washington State guidelines.

Areas of particular concern with regards to wildlife include:

The number that precedes the area name in the list (below) corresponds to the numbered area on the map. 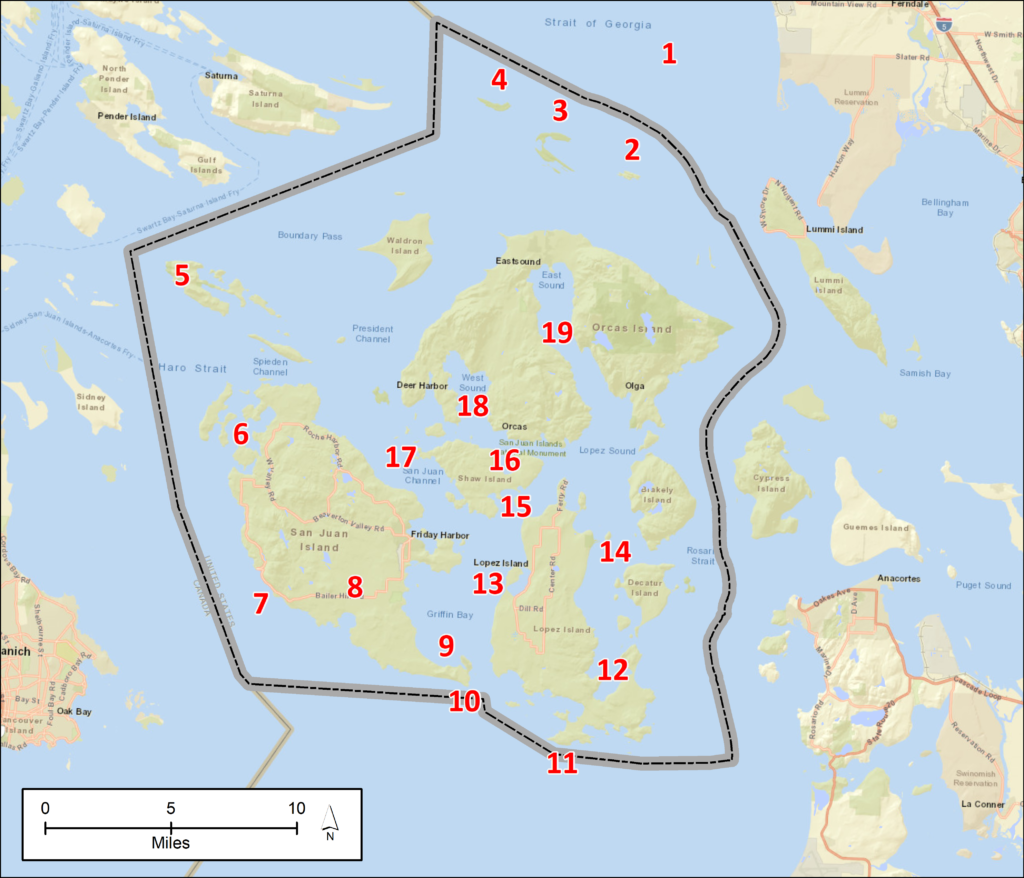 These places have resources at risk but traditional booming strategies may not be effective or practical in most circumstances.  The Planning and Operations Sections should consider alternative options such as sorbents, enhanced on-water skimming, or other tactics to prevent oiling of these sites.