This section provides a description of the physical features, hydrology, climate, and winds in the Snake River Ice Harbor Pool GRP planning area, and an oil spill risk assessment. The planning area covers 256 square miles, and includes the 31.8 mile reach of the Ice Harbor Pool (a.k.a. Lake Sacajawea) from the upstream side of the Ice Harbor Lock and Dam (located at river mile 9.7) to the downstream side of the Lower Monumental Dam (at river mile 41.5). The area around Lake Sacajawea is rural with no large towns present. Pasco and Kennewick are the largest cities nearby, both located downstream of the Ice Harbor Dam near the confluence of the Snake and Columbia Rivers. The area predominately resides in Water Resource Inventory Area Lower Snake (WRIA 33), but also contains small portions of the Esquatzel Coulee (WRIA 36) to the north, and Walla Walla (WRIA 32) to the south. The planning area falls within the boundaries of Franklin and Walla Walla counties.

Volcanic activity built up a stratum of mud, ash, and lava in the geologic column in the area now known as eastern and central Washington and Oregon during the Eocene (55.8-33.9 million years ago), Oligocene (33.9-23 million years ago), and Miocene (23-5.3 million years ago) Epochs (Smith 2011). Basalt flows then covered the area, known as the Columbia River Basalt Group, in layers, forming a strong foundation of basaltic rock at least one mile thick (Foster 2008). Subsequent lava and ash eruptions raised the Cascade Mountains during the Miocene Epoch, and the mountains began to lift when hundreds of volcanoes erupted during the Pleistocene Epoch (2.6 million – 11,700 years ago). As the mountains rose, the Snake and Columbia Rivers carved out deep gorges. Towards the end of the Pleistocene (~16,000-14,000 years ago) the Missoula floods battered these gorges over 100 times when the glacial dam forming Glacial Lake Missoula was repeatedly breached, releasing high velocity debris-filled waters to a height of 900 feet and scouring the landscape with a discharge of 10 million cubic feet per second (Lee 2009). This series of events has been described as one of the greatest flood occurrences in the history of the earth.  Basalt bluffs and cliffs prevail throughout most of the length of the Ice Harbor Pool, but gradually flatten toward the end of the gorge craved by the Snake River until it reaches its mouth at the Columbia (USACE 1977). Shoreline habitats along this section of the Snake River can be characterized as: exposed rocky headlands, wave-cut platforms, pocket beaches along exposed rocky shores, sand beaches, sand and gravel beaches, sand and cobble beaches, sheltered rocky shores, and sheltered marshes (NOAA 1993).

The Snake River is the 13th longest river in the United States (Krammerer 1990). The Ice Harbor Pool is approximately 32 miles in length and has a drainage area encompassing 103,200 square miles. The Ice Harbor Dam, which creates Lake Sacajawea, is 2,822 feet long and about 100 feet tall. The elevation of Lake Sacajawea during normal dam operations at full pool is 440 feet. The minimum pool elevation is 437 feet, and the maximum capacity of the pool is 446 feet. Prior to the construction of the dams the maximum unregulated historical peak discharge was 409,000 cubic feet per second (cfs) (1894). Currently, the average monthly outflow of both the Ice Harbor and Lower Monumental Dams is approximately 34,000 cfs (USACE 2016).

The climate in this area of the Snake River is arid, with an annual precipitation of 10.4 inches, with over 50% occurring between November and March and little rain in summer. Annual snowfall is 5.8 inches, with more than 75% occurring in December and January. Much of the precipitation occurs as drizzle or intermittent rains from winter through spring with extended periods of cloudiness. A few regional storms with showers occur in winter but heavy rain is rare. Only a small percentage of the precipitation becomes groundwater available for human use. Much of the area within a few miles of the riverbanks is farmed through irrigation using water pulled from the Snake River. The average annual temperature is 53.9°F, ranging from a mean low of 34.2°F in January, to a mean high of 74.2°F in July and August. Recorded temperature extremes are -22°F and 111°F.

There are no tidally influenced areas within the planning area. The river’s flow is governed strictly by dams on the Snake River, with USACE determining exactly when and how much water is allowed to pass through the spillways. Nearly all flow into the Ice Harbor Pool comes from the Snake River after having passed through the Lower Granite, Little Goose and Lower Monumental Dams in Washington State. The Ice Harbor Pool is very lake-like, with dam controlled outflow rates. The lowest flow rates typically occur during the late summer, autumn, and winter months. Higher flows occur during the spring snow melt. The upper reach of the reservoir below the Lower Monumental Dam may attain higher flows than the lower reach, especially during spring runoff. Nearer to the Ice Harbor Dam, the current is practically nonexistent, except for the area in front of the spillway and powerhouse, which may have strong currents and undertows that are very dangerous.

The Snake River is plentiful in natural, cultural, and economic resources, all at risk of injury from oil spills. Potential risks to these resources include commercial vessels and barges, road systems, rail transportation and facilities, aircraft, recreational boating, and other oil spill risks. Industrial development along this reach of the river consists of storage facilities for grain and irrigation pumping stations.

This area is composed of a wide variety of aquatic, riparian, and upland habitats. These varied habitats support a complex diversity of wildlife species, including large and small mammals, songbirds, birds of prey, upland birds, and waterfowl, as well as numerous reptiles and amphibians. Some species are resident throughout the year; while others seasonally migrate through the sub-basin.

To improve habitat, the Army Corps of Engineers has established numerous Habitat Management Units (HMUs) along the Snake River. The size and complexity of these HMUs varies, but many of them include irrigation, tree and shrub plantings, food plots, nesting and brooding cover, brush piles, and nesting structures that attract wildlife. Other significant wildlife areas, in addition to those habitats provided by HMUs, include shorelines with natural riparian vegetation, islands, wetlands, stream and river mouths (both free-flowing and impounded), and shallow backwater areas – especially adjacent to natural riverbanks. Public parks, private lands, and recreational areas surround the river. Specific areas of concern are listed below and depicted on the map in Figure 6.1 (near the end of this section). The number that precedes the area name in the list (below) relates to the numbered area on the map. 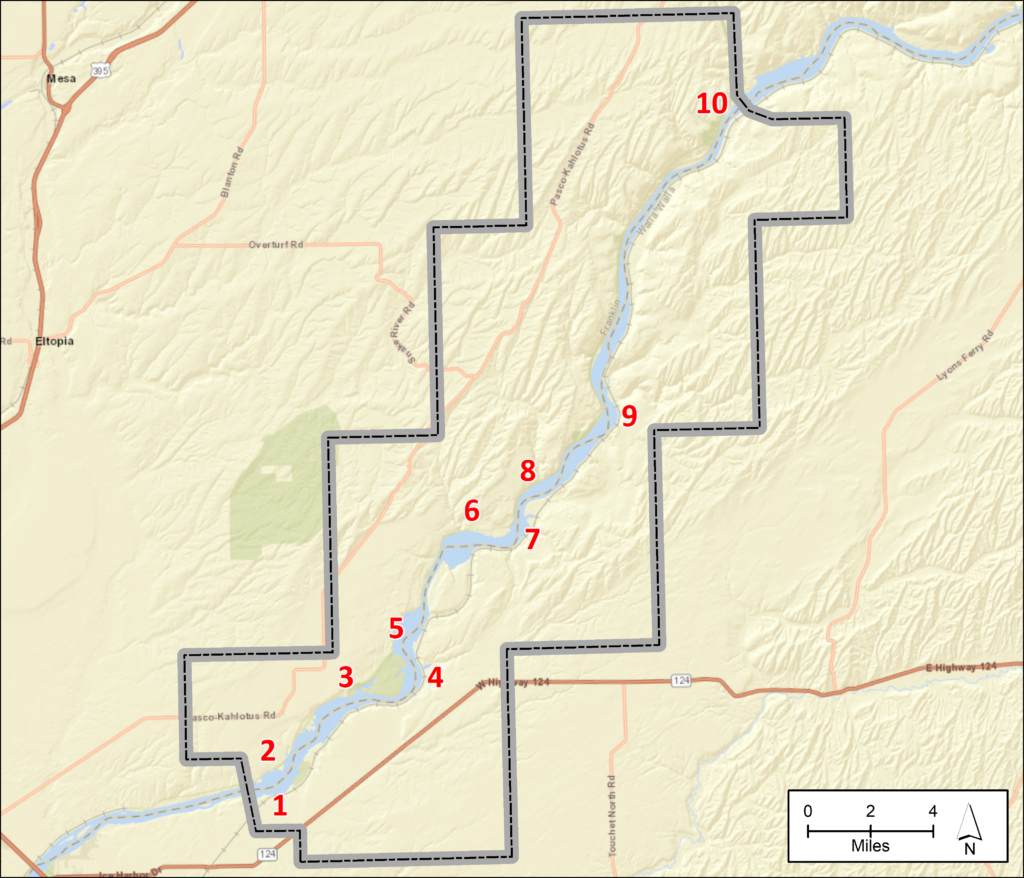 Socio-economic sensitive resources are facilities or locations that rely on a body of water to be economically viable. Because of their location, they could be severely impacted if an oil spill were to occur. Economically sensitive resources are separated into three categories: critical infrastructure, water dependent commercial areas, and water dependent recreation areas. The Economic Resources at Risk PDF provides a list of economic resources for this GRP area.