This section provides a description of the Snohomish Basin’s physical features, hydrology, climate, and winds and includes an overview of the oil spill risks in the region. The Snohomish Basin, also called Water Resource Inventory Area 7 (WRIA 7), consists of three main river systems and numerous tributaries. The headwaters of the Skykomish River and Snoqualmie River form in the mountains of the Cascade Range. These rivers flow west and converge to form the Snohomish River in the floodplains of the Snohomish Basin. The Basin drains 1,900 square miles from the west crest of the Cascade Range to Puget Sound near Everett, Washington. There are 2,718 miles of rivers and streams in the Basin (Snohomish County). It is the second largest basin draining into Puget Sound.

The main channel of the Snohomish begins at the confluence of the Skykomish and Snoqualmie Rivers near the City of Monroe, approximately 20 miles upstream from the river’s mouth. The river is joined by the Pilchuck River and flows past the City of Snohomish near river mile 13. As the Snohomish River Estuary forms near the City of Everett, it branches into several large braided channels: Ebey Slough along the east and north side of the estuary, Steamboat Slough and Union Slough through the middle of the estuary, and the main Snohomish River channel along the south and west side. The river outflows to Puget Sound at Port Gardner Bay near Everett at the western edge of Snohomish County.

The Snohomish Estuary is the second largest estuary on Puget Sound. Significant restoration work is reclaiming critical habitats in the Snohomish Estuary (Snohomish County). Between 2005 and 2019, over 1,620 acres of estuary were restored, more restored acres than any other estuary on Puget Sound (Snohomish County). Multiple projects are working on reconnecting off-channel habitats, improving fish passage and tidal exchange, restoring shoreline conditions, and enhancing the riparian environment, while preventing further degradation.

Tectonic and volcanic activity, glacial movement, flowing glacial meltwater, and human development carved the physical features of the Snohomish Basin. In the headlands of the basin, steep mountain catchments, underlain with bedrock give way to broad floodplains as the rivers converge near Puget Sound. In the lowland portion of the basin, several diking and flood control districts use dikes to manage the floodplains of the Snohomish, Skykomish, and Snoqualmie Rivers to control the rivers’ flow.

Tribes of the Snohomish Basin

The Snohomish Basin is within the usual and accustomed territories of a number of American Indian Tribes. The Indian reservation of the Snoqualmie Tribe is located near the City of Snoqualmie, approximately one mile south of the Snoqualmie River. The Tulalip Tribe’s reservation is location directly northwest of the Snohomish River mouth, near Marysville. Other federally recognized Tribes with access to the resources of the Snohomish Basin may include the Lummi Nation, Muckleshoot Tribe, Nooksack Tribe, Samish Nation, Sauk-Suiattle Tribe, Squamish Tribe, Stillaguamish Tribe of Indians, Swinomish Tribe, Upper Skagit Tribe, and Yakama Nation.

Tribes can fill many roles during an oil spill response including full participation in Unified Command, providing resource specialists in the Environmental Unit, monitoring on-scene operations, and more. Information regarding tribal participation in a response is available on the Northwest Area Committee/Region 10 Regional Response Team website. Contact information for the tribes in this planning area can be found in the Resources at Risk section and on the Spill Response Contact Sheet of this GRP.

The cities and towns lining the rivers of the Snohomish Basin were established in support of logging, mining, and agricultural activities in the late 1800s and the towns’ proximity to the former Great Northern Railway. Larger cities within the Basin include Everett, Marysville, Lake Stevens, Snohomish, Monroe, Duvall, and North Bend. Smaller cities and towns include Sultan, Gold Bar, Index, Skykomish, Carnation, Fall City, and Snoqualmie.

The moderate climate of the Snohomish River Basin provides warm and dry summers and mild, wet, and cloudy winters. In western Washington, rainfall is often described as drizzle, showers, sprinkles, or mist. Precipitation is typically moderate in intensity and will persist for hours to days. In Everett, precipitation is highest in December when the total average precipitation is 4.96 inches and lowest in July when the average total is 1.04 inches. Annual average temperatures range between 58.8°F and 42.4°F, with the monthly averages peaking in August at 72.7°F and fall to 33.1°F in January (Western Regional Climate Center).

On the Snohomish River, the tide influences water levels and flow as far upriver as Monroe. Tidal cycles will cause periodic reversal and bidirectional water flows in the estuary and on the Snohomish River up to the convergence of the Snoqualmie and Skykomish Rivers. Puget Sound’s tides are mixed semi-diurnal, with two daily high tides and two low tides of varying heights.

There are numerous oil spill risks within the Snohomish River Basin including, oil transport infrastructure such as pipelines, railways, highways, Navy activities at Naval Station Everett, and shipping and marine activities at the Port of Everett, among other risks. A spill could significantly impact public, environmental, and economic health, as well as cultural, historical, and natural resources.

This area contains a wide variety of aquatic, riparian, and upland habitats, including several islands and a limited amount of nearshore marine area. These habitats support many of Washington’s anadromous salmonid species as well as a complex diversity of other wildlife including mammals, birds, and amphibians. Due to their life histories and/or behaviors, some of these species are unlikely to become directly oiled during a spill incident but may be disturbed by other response operations such as cleanup and reconnaissance. Some of the bird species are resident throughout the year, but many others seasonally migrate through the area. 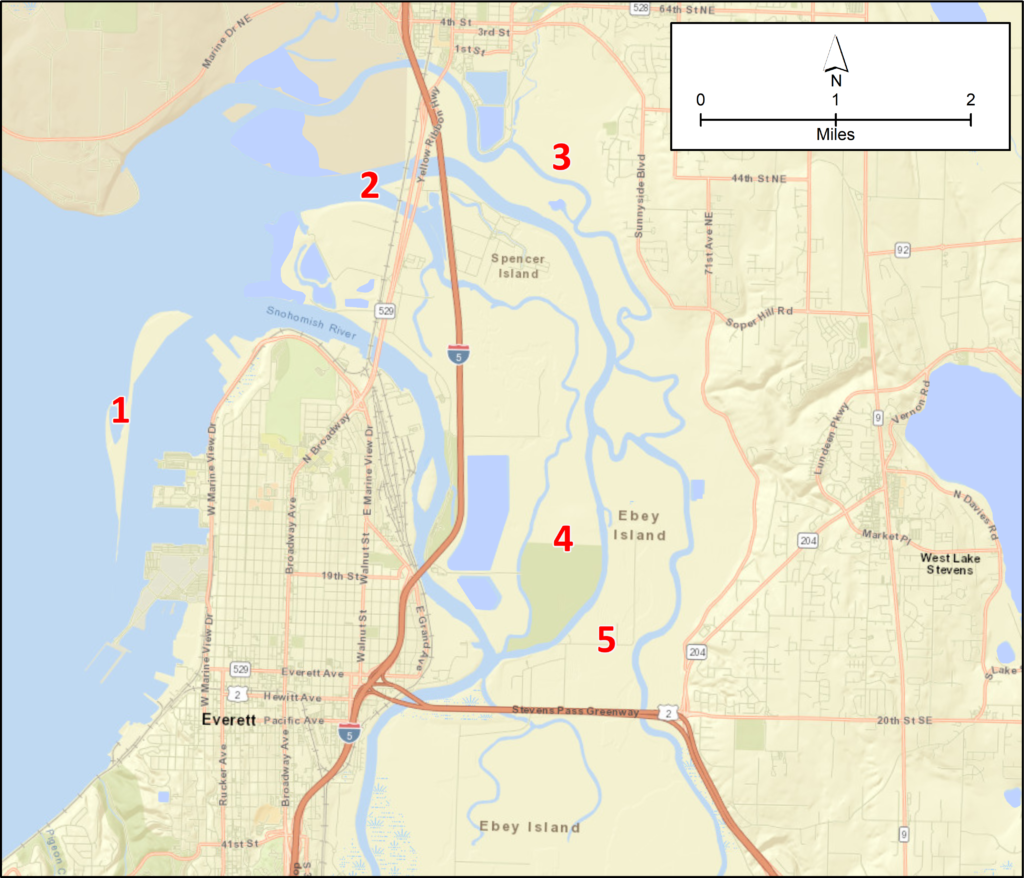 Oil spills pose a significant risk to indigenous cultures, indigenous communities, subsistence harvests, and tribal treaty resources when spills impact land and water used for cultural and traditional practices. All Tribes with land, waters, usual and accustomed (U & A) areas, tribal ceded areas, tribal fisheries habitat, archaeological sites, or other interests should be notified of all spills impacting or potentially impacting these areas. Section 4000 of the Northwest Area Contingency Plan provides more information on tribal engagement during a response. Contact information for the tribes in this planning area can also be found in the Spill Response Contact Sheet of this GRP. If you are unsure of the Tribes to contact then do so with all of them and allow them to decline participation.

Socio-economic sensitive resources are facilities or locations that rely on a body of water to be economically viable. Because of their location, they could be severely impacted if an oil spill were to occur. Economically sensitive resources are separated into three categories: critical infrastructure, water dependent commercial areas, and water dependent recreation areas. The appendix (linked in the Table of Contents) provides a list of economic resources for this GRP area.

Sites Recommended for Alternative Shoreline Protection: The following sites have identified sensitive resources but traditional booming strategies may not be effective or practical in most circumstances. Alternative options, such as sorbent, enhanced on-water skimming nearby, or other strategies should be considered for these sites.