The geology of Washington’s coast and Puget Sound is complex and beautiful. The majority of the state’s population lives and works in the Puget Sound. 20,000 years ago Puget Sound was under a mile of ice. Glaciers covered everything in between the Olympics and the Cascade mountains and spread as far south as Olympia (DNR Geology). Glaciers advanced from Canada and retreated four or more times. Over a few million years, Puget Sound was carved and scoured by glaciers. In the Cenozoic Era and Pleistocene Epoch (2.6 million – 11.7 years ago), the first of the two epochs of the Quaternary Period predominantly included erosion and deposition of fluvial sediments that consist today of mostly glacial deposits and volcanic rock including Alluvial, Fine-Grained, Course-Grained and a Basement Confining Unit of older and lower volcanic tertiary rock in the Puget lowland. (WOU Geology) Today, significant sediment accumulation is occurring in widely separated river valleys, lake basins, and the Puget Sound. (DNR Geology)

Vertical mixing takes place throughout the Sound in constricted or shallow areas, such as the Tacoma Narrows. South Puget Sound is traditionally defined by the Tacoma Narrows and an entrance sill located just to the south of the Narrows. The sill is a shallow reach formed during the glacial epochs tens of thousands of years ago, with typical depths around 50 m, although there are deeper regions greater than 150 m.  The hydrology of the South Puget Sound is a complex system of straits and open water.  This is a two layer system of highly variable circulation patterns, where fresh less saline surface water flows seaward and more saline bottom water flows landward.  Unusually deep water and strong currents characterize these waters. This estuary also varies highly in temperature and salinity, with surface layers influenced by both meteorology and freshwater inputs.

Washington’s climate is mild. Wind in the Puget Sound varies between years. There are several climatic controls which have a definite influence on the climate, namely; (a) terrain, (b) Pacific Ocean, and (c) semi-permanent high and low pressure regions located over the North Pacific Ocean.  The effect of these various controls combine to produce entirely different conditions within short distances. The strongest winds are generally from the south or southwest and occur during the late fall and winter.  The prevailing directions of the wind is south or southwest during the wet season and northwest in summer.  The average wind velocity is less than 10 m.p.h.  Annual precipitation ranges from 32 to 45 inches and winter season snowfall ranges from 10 to 20 inches.  Both rainfall and snowfall increase with a slight increase in elevation and distance from the Sound.  Snow generally melts rather quickly and depths seldom exceed six to 15 inches

The South Puget Sound is plentiful in natural, cultural, and economic resources, all at risk of injury from oil spills.  Potential oil spill risks include, but are not limited to oil pipelines, commercial vessel traffic, road systems, rail transportation, aircraft, recreational boating, and other oil spill risks.  This section briefly discusses these risks and how they could impact the GRP planning area.

This section provides a summary of natural, cultural, and economic resources at risk in the vicinity of the south Puget Sound area, including those resources at risk from oils with the potential to sink or submerge. It provides general information on habitat, fish, and wildlife resources, and locations in the area where sensitive natural resource concerns have been identified. It offers a summary of cultural resources that include fundamental procedures for the discovery of cultural artifacts and human skeletal remains. A list of cultural and economic resources in the area and general information about flight restrictions, hazing, and oiled wildlife is detailed below.

This area contains a wide variety of marine, aquatic, riparian, and upland habitats. These habitats support many of Washington’s anadromous salmonid species as well as a diversity of other wildlife including mammals, birds, and amphibians. Due to their life histories and/or behaviors, some of these species are unlikely to be directly oiled during a spill incident but may be disturbed by other operations such as cleanup, reconnaissance, or fire suppression activities. Some of the bird species are resident throughout the year, but many others seasonally migrate through this area. 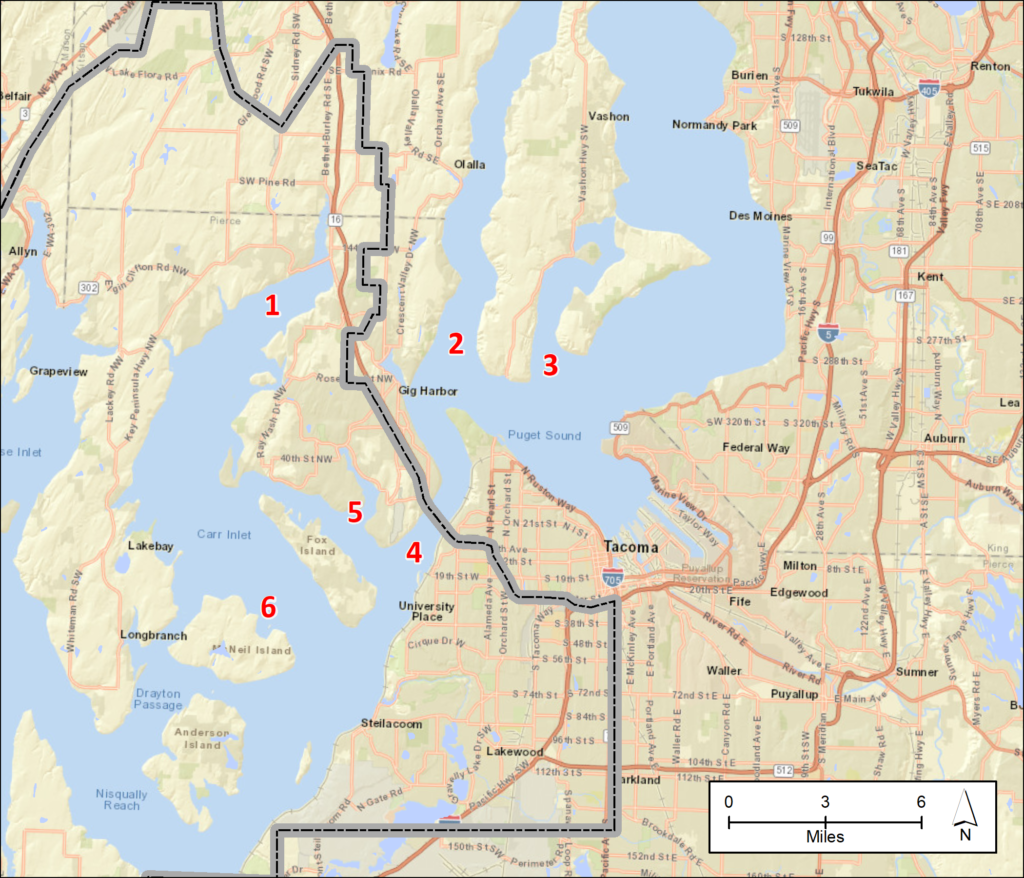 7. Upper Case Inlet (north of Hartstene Is.): The northern reach of this inlet contains large areas of important intertidal and shallow subtidal habitat, including eelgrass and saltmarsh. Fish and wildlife within this area include hardshell clams, forage fish, salmonids, marine birds and herons.

9. Hope and Squaxin Island (west side): The confluence of Hammersley and Totten Inlets and Pickering and Squaxin Passages supports dense concentrations of various fish and wildlife. Kelp bed at southern end of Squaxin. Forage fish spawning includes herring, sandlance and surf smelt. Intertidal and shallow subtidal habitats in this area support hardshell clams and provide rearing habitat for juvenile salmonids. Waterfowl and marine bird concentrations are common in this area. Hope Island is a State park. Tribal lands and resources are present on Squaxin Island. 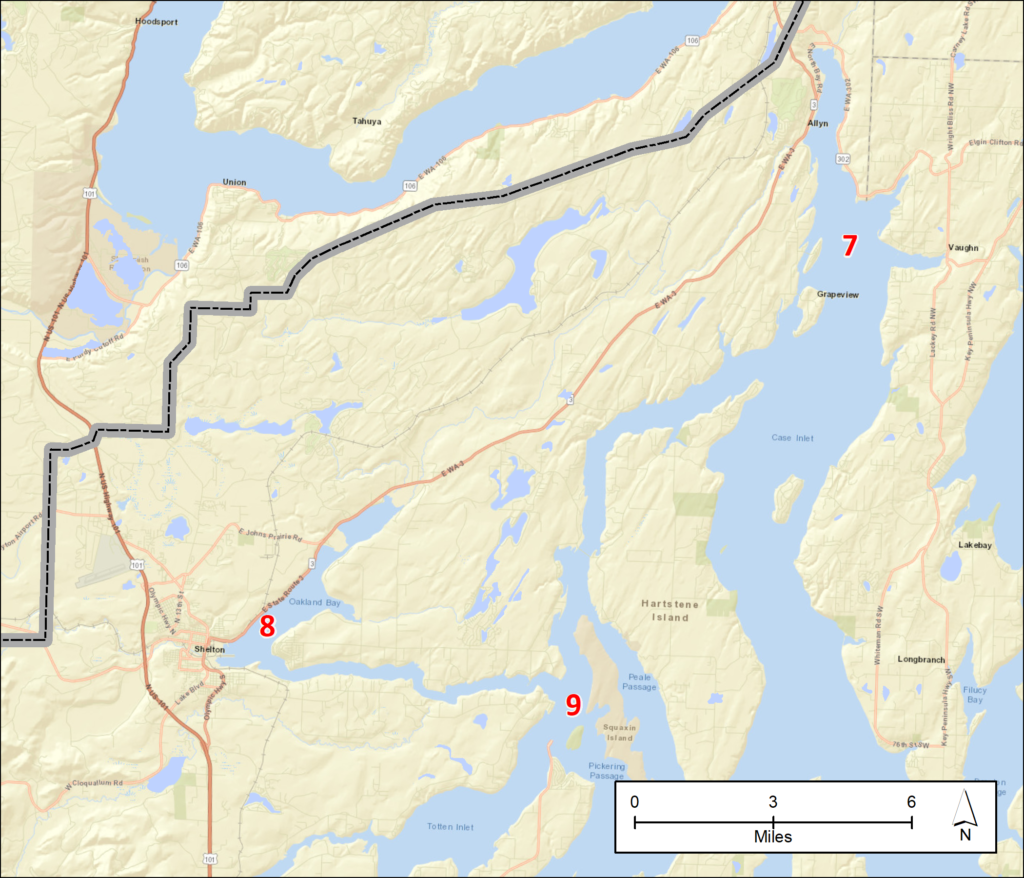 10. Totten Inlet: Oyster Bay, at the south end of this inlet, is the most important shorebird concentration area in the south Sound. It is also one of the largest wintering waterfowl concentration areas in this region. Hardshell clams and forage fish spawning habitat occur throughout the inlet and herring spawning occurs in Gallagher Cove.

11. Eld Inlet: Intertidal habitat at the head of the bay supports hardshell clams and concentrations of wintering shorebirds. Forage fish spawning habitat is present on most shorelines of the inlet. 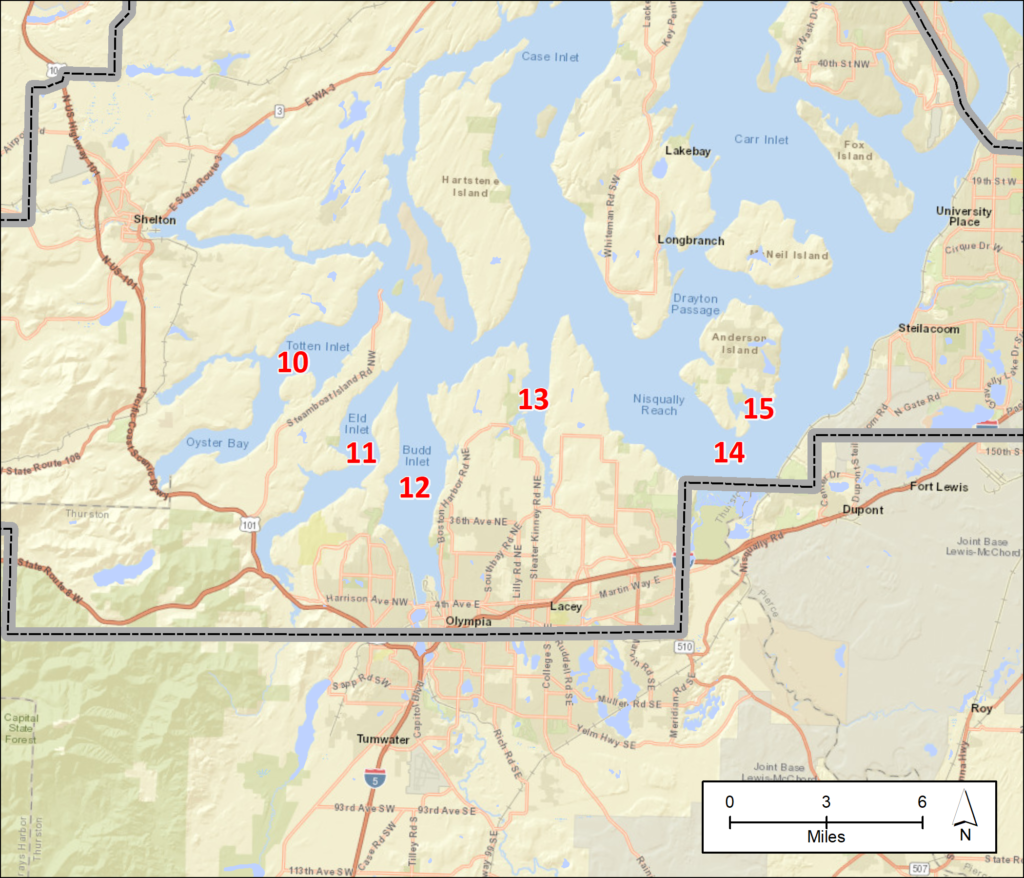 The Environmental Unit (Planning Section) may recommend flight restriction zones to minimize disturbance or injury to wildlife during an oil spill. Pilots/operators can decrease the risk of aircraft/bird collisions, prevent the accidental driving of wildlife into oiled areas, and minimize abandonment of nests by keeping a safe distance and altitude from these identified sensitive areas. The Air Operations Branch (Operations Section) will manage all aircraft operations related to a response and will coordinate the establishment of any Flight Restriction Zones as appropriate. Environmental Unit staff will work with the Air Operations Branch Director to resolve any conflicts that arise between flight activities and sensitive resources.

In addition to restrictions associated with wildlife, Tribal authorities may also request notification when overflights are likely to affect culturally sensitive areas within reservations.  See Oil Spill Best Management Practices (NWACP Section 9301) for more information on the use of aircraft and helicopters in open water and shoreline responses.

The Wildlife Deterrence Unit within the Wildlife Branch (Operations Section) manages wildlife deterrence operations. These are actions intended to minimize injuries to wildlife by keeping animals away from the oil and cleanup operations. Deterrence activities may include using acoustic or visual deterrent devices, boats, aircraft or other tools. The Wildlife Branch works with state and federal agencies, and the Environmental Unit (Planning Section), to develop deterrence plans as appropriate. For more information see the Northwest Wildlife Response Plan (NWACP Section 9310) and Northwest Area Wildlife Deterrence Resources (NWACP Section 9311).

Capturing oiled wildlife may be hazardous to both personnel and the affected animals. Incident personnel should not try to approach or capture oiled wildlife but should report any observations of oiled wildlife to the Wildlife Branch (Operations Section). For more information see the Northwest Wildlife Response Plan (NWACP Section 9310).

There are no federally designated wilderness areas present in this GRP region.