This section provides a description of the physical features, hydrology, climate, and winds in the Sumas River GRP planning area, and an oil spill risk assessment in Section 2.6. The planning area is approximately 53 square miles, and resides within the boundaries of Whatcom County. It covers the main stem of the portion of the Sumas River that falls in the United States, beginning northwest of Deming along Washington 9 and continuing north along the highway to the international border. It includes the eastern portion of the City of Everson, the entirety of the City of Nooksack, its western neighbor, and the whole of the city of Sumas. It also includes the drainage area of Johnson Creek, which follows Highway 9 south to Everson, and its tributary Squaw Creek, which passes west along Washington 546 almost to Lynden. Portions of WRIA 1 (Nooksack) fall within this planning area. The Sumas River GRP is bordered by the Nooksack River GRP to the south and west, and the country of Canada to the north.

The Sumas GRP planning area covers approximately 53 square miles in the northern part of Whatcom County. The majority of the area is relatively flat lowlands surrounding the Sumas River and its major tributary Johnson Creek. At least eight other smaller creeks contribute to the flow of either Johnson Creek or the Sumas itself, which flows north into Canada near the town of Sumas. The predominant use of this area is for agriculture. Whatcom County is home to around 1400 farms which produce various types of fruit and berries as well as corn and hay to feed dairy cows. Sixty-five percent of the red raspberries grown in the United States are from Whatcom County. The county is also a center for milk production, producing 246 million dollars of milk annually from 44,000 cows (AWB 2015). The eastern side of the planning area consists of the western slopes of Sumas Mountain.  Dale Creek, Swift Creek, Collins Creek and Breckenridge Creek all originate near the top of Sumas Mountain and flow into the Sumas River. This portion of the area is heavily forested with the predominant land use being logging.

The Sumas River begins in the foothills of Sumas Mountain, in north-central Whatcom County. Its tributaries drain from the western slopes as it flows generally north, paralleling Highway 9 and BNSF tracks until it passes through the city of Nooksack. Here, the Sumas, railroad and highway turn northeast as they head towards Canada. As the Sumas wends its way along the valley floor to the border, it is fed by a number of tributary streams, including Bone Creek, Breckenridge Creek, Collins Creek, Dale Creek, Johnson Creek, Kinney Creek, Saar Creek, Squaw Creek, and Swift Creek. Its major tributary in the planning area is Johnson Creek, which feeds into the Sumas from the west, about one mile south of the border.

The temperatures in western Whatcom County remain mild year round. Clearbrook, a few miles west of Sumas on Johnson Creek, averages 16” of total snowfall, 46” of total precipitation, and highs of 75 to lows of 30 (WRCC 2016). Winds at Bellingham airport, 16 miles southwest of the planning area, come from the south and average between 6 and 9 mph (WRCC 2006).

There are no tidally influenced areas within the planning area. The overall river current is controlled by the natural slope of the river from the foothills and input from tributary creeks (especially during heavy instances of precipitation). In general the water flows faster from December to April, during the rainy season, and slowest in August and September during the dry season.

The Sumas River is plentiful in natural, cultural, and economic resources, all at risk of injury from oil spills. Potential risks to these resources include pipelines, road systems, rail transportation and facilities, and other oil spill risks. 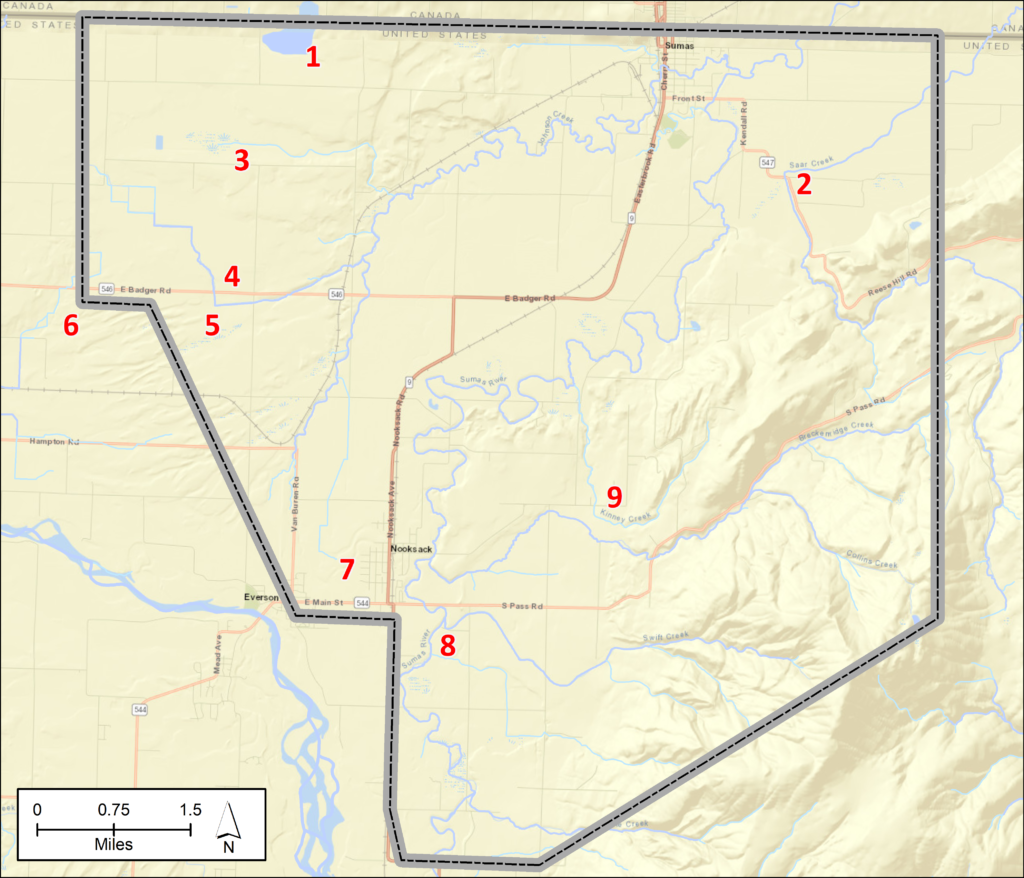