The physical features of the area now known as eastern and central Washington and Oregon were greatly influenced by volcanic activity, which built up a stratum of mud, ash, and lava in the geologic column during the Eocene (55.8-33.9 million years ago), Oligocene (33.9-23 million years ago), and Miocene (23-5.3 million years ago) Epochs (UC Berkeley). Basalt flows, known as the Columbia River Basalt Group, then covered the area in layers, forming a strong foundation of basaltic rock up to three miles thick (WA DNR). The southernmost part of this planning area forms the western edge of the Columbia River Basalt flows. Subsequent lava and ash eruptions raised the Cascade Mountains during the Miocene and Pleistocene Epochs (2.6 million – 11,700 years ago). As the mountains rose, the Yakima, Snake, and Columbia Rivers carved out deep gorges.

The climate in the planning area varies widely, as the river descends from the heavy precipitation in the Cascade Mountains, passes through the central Washington foothills and then enters the canyon and plateaus south of Ellensburg. At the upstream end of the planning area at Lake Keechelus, near Snoqualmie Pass, annual snowfall exceeds 221 inches and total precipitation averages 65.8 inches (WRCC 1977). A few miles to the southeast, Cle Elum records 22.5 inches of precipitation and 83 inches of snowfall (WRCC 2016). Ellensburg receives 9.2 inches of annual precipitation, but 35.2 inches of total snowfall. Temperatures in the planning area range from summer highs in the low eighties to average winter lows in the teens, with recorded extremes above 100 in the summers and 30 below zero in winter (WRCC 2016).

There are no tidally influenced areas within the planning area. The Yakima River’s flow is moderated by the presence of reservoirs and other irrigation infrastructure. The reservoirs managed by the Yakima Project reduce the river flow in the winter, while water is being stored, and increase from April through August, when water is released for irrigation use.

The Upper Yakima River is plentiful in natural, cultural, and economic resources, all at risk of injury from oil spills. Potential risks to these resources include road systems, rail transportation and facilities, aircraft, recreational boating, and other oil spill risks.

This chapter provides a summary of natural, cultural, and economic resources at risk in the planning area. It provides general information on habitat, fish, and wildlife resources, and locations in the area where sensitive natural resource concerns exist. It offers a summary of cultural resources that include fundamental procedures for the discovery of cultural artifacts and human skeletal remains. General information about flight restrictions, wildlife deterrence, and oiled wildlife can be found near the end of this section. 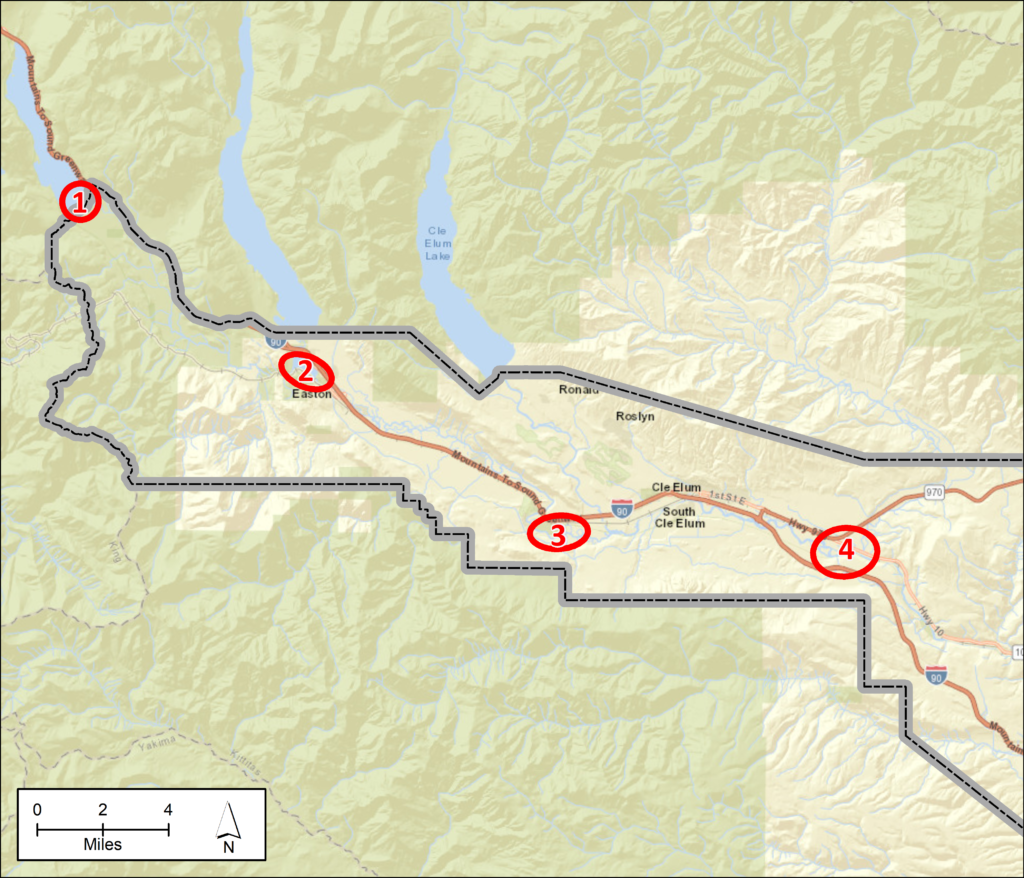 Culturally significant resources are present within the planning area. Information regarding the type and location of cultural resources is maintained by the Washington Department of Archeology and Historic Preservation (WDAHP). This sensitive information is made available to the Washington Department of Ecology for oil spill preparedness and response planning. The Tribal Historic Preservation Offices (THPOs) or Cultural Resource Departments of local tribes (see Table 6.1) may also be able to provide information on cultural resources at risk in the area and should be contacted, along with WDAHP, through normal trustee notification processes when significant oil spills, or smaller spills above reportable thresholds, occur in the area.