This section provides a description of the physical features, hydrology, climate, and winds in the Washington Deschutes River GRP planning area, and an oil spill risk assessment in Section 2.6. The WADE-GRP planning area covers approximately 312 square miles to the south of Puget Sound. The planning area resides primarily in Thurston, with small portions located in Greys Harbor and Lewis Counties. It fully or partially includes the communities of Lacey, Littlerock, Olympia, Rainier, Tenino, and Tumwater. The northern border of the planning area stops at Capitol Lake, adjacent to the most southerly portion of Puget Sound, which is covered by the South Puget Sound GRP; the WADE planning area does not contain any land adjacent to marine waters. The WADE GRP borders the Chehalis River GRP planning area to the west and southwest. The eastern boundary of the planning area is well within the lowlands, with the base of Mount Rainier more than 30 miles to the east. Joint Base Lewis-McChord and the Nisqually Indian Community border the WADE GRP to the northeast and fall within the Nisqually GRP planning area. No tribal reservations are located here, but along with the Nisqually, the Chehalis, Muckleshoot, Puyallup, Squaxin, and Yakama Tribes all have potential interests in the planning area.

The main physical feature of this planning area is the Deschutes River and its many (at least a dozen) tributaries. The headwaters of the Deschutes River are located to the southeast of Olympia, in the mountainous and heavily forested areas of the Gifford Pinchot National Forest. From there the river travels 57 miles in a northwesterly direction until it empties into Capital Lake and Budd Inlet. Approximately 25 miles of the Deschutes River fall within this planning area. A second river, the Skookumchuck River, flows approximately 12 miles in an east to west direction through the southern part of the planning area. This river, along with its numerous tributaries, such as Hanaford Creek, flows into the Chehalis River. Small farms, suburban development, and the urban area around Olympia characterize Land use surrounding the middle and lower Deschutes River (City of Tumwater 2017). Olympia is at the northern boundary of the plan. The northwestern side consists of the Capital State Forest surrounding Capital Peak, while the eastern side includes portions of the Fort Lewis Military Reservation. Although both of these areas are heavily forested, only a small portion in the southeast corner of the planning area, characterized by heavily forested timberland, is used for logging.

The climate in the Washington Deschutes planning area, within Thurston and Lewis Counties, is mild. The area gets between 49 and 75 inches of rain per year, above the US average of 39 inches; however, the snowfall ranges between 9 and 16 inches, lower than the average US city, which gets 26 inches of snow per year. Although raining a great deal of the year, the perceived humidity comfort levels do not vary but remain close to zero throughout the year. The number of days with any measurable precipitation averages between 100 and 105, and there are usually between 136-138 sunny days per year. The average percentage of the sky covered by clouds experiences extreme seasonal variation over the course of the year, with the cloudier part of the year beginning in October and lasting over 8 months. Temperatures typically vary between 34 and 81 degrees. The July high is 76-77 degrees, while the January low is 32-35 degrees (Sperling’s Best 2017) The average hourly wind speed in the WADE-GRP planning area does not vary significantly over the course of the year, remaining within 0.4 miles per hour of 2.1 miles per hour throughout, although wind direction does change, with winds coming predominantly from the west from April to October and from the south the remainder of the year (Weather Spark).

There are no tidally influenced areas within the planning area. The flow speed on the main fork of the Deschutes River at the E Street Bridge gage (river mile 0.7) has an annual mean velocity of 444 cfs, while at the gage near Rainier (river mile 22.75) the river flow speed has an annual mean velocity of 256 cfs. Each portion of the river will have faster or slower speeds based on a variety of factors, including channel width, channel depth, debris blockages, and elevation change, among others. Sloughs and side channels will have significantly lower flow speeds commensurate with their channel width, depth, and vegetation.

The Washington Deschutes River is plentiful in natural, cultural, and economic resources, all at risk of injury from oil spills. Potential oil spill risks include, but aren’t limited to, road transportation, rail transportation, oil pipelines, aircraft, and recreational boating. This section briefly discusses these risks and how they could impact the WADE-GRP planning area.

This section provides a summary of natural, cultural, and economic resources at risk in the planning area. It provides general information on habitat, fish, and wildlife resources, and locations in the area where sensitive natural resource concerns exist. It offers a summary of cultural resources that include fundamental procedures for the discovery of cultural artifacts and human skeletal remains. General information about flight restrictions, wildlife deterrence, and oiled wildlife can be found near the end of this section. 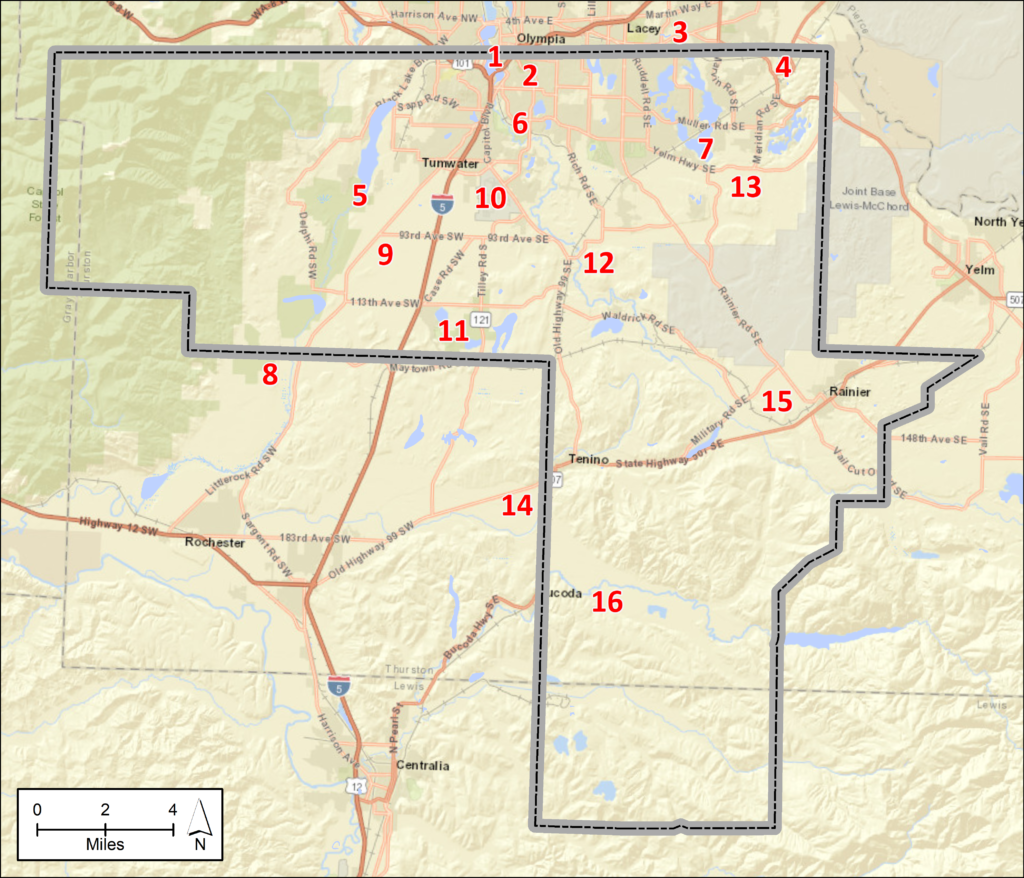 Culturally significant resources are present within the planning area. Information regarding the type and location of cultural resources is maintained by the Washington Department of Archeology and Historic Preservation (WDAHP). This sensitive information is made available to the Washington Department of Ecology for oil spill preparedness and response planning. The Tribal Historic Preservation Offices (THPOs) or Cultural Resource Departments of local tribes (Table 6.1) may also be able to provide information on cultural resources at risk in the area and should be contacted, along with WDAHP, through normal trustee notification processes when significant oil spills, or smaller spills above reportable thresholds, occur in the area.