This section provides an overview of the area’s physical features, hydrology, climate and winds, and tides and currents in the Willapa Bay GRP planning area, and includes an overview of the oil spill risks in the region. The Willapa Basin sits among the coastal hills along the Pacific Ocean just north of the Columbia River. The Basin covers more than 1000 square miles including the Willapa Bay estuary with over 100 miles of shoreline. Pacific County located on the Southwest Pacific coast of Washington state, encompasses 1,223 square miles and the first embayment north of the Columbia River. The Bay is separate from the expanse of the Pacific Ocean by the 28-mile Long Beach Peninsula to the west. The Willapa Hills are to the East, the Columbia River at the South, Grays Harbor bay to the north, and nestled inside Willapa Bay at the South at over 8 square miles and accessible by boat only is Long Island. Rich with cultural history, the Chinook, Chehalis, and Kwalhioqua peoples lived and hunted in the area for at least 2000 years. They camped, fished, gathered oysters and clams, and hunted on Long Island. Today the Shoalwater Tribe remain in the area.

The opening to Willapa Bay is from the East, passing Shoalwater and Tokeland at the north and faces into the confluence with the North and Willapa Rivers. The opening into the Bay is ~7 miles wide from the tip of the Long Beach Peninsula at Ledbetter Point across to land. Overall, there are shallow extensive tide flats and expansive saltmarshes inside the Bay, punctuated by Long Island that is accessible by boat only, though the top of the island is located ~14.5 miles south of the Bay entrance. More specifically, Long Island is ~6.2 miles long and ~2.5 miles wide at the widest point. From the southeast end of Long Island ~0.5 miles over to the mainland is the Willapa Bay National Wildlife Refuge situated in southeast Willapa Bay. Travel south along the East side of the Bay past the Bone River Natural Area and the Naiwiakum River located North of Bay Center. Tucked in south of the Naiwiakum River are the north, middle and south forks of the Palix River. At the Palix River South Fork, the land extends into the Bay where the small community of Bay Center is situated. Further south and past additional small tributaries, the land extends into the Bay south of the Nehmah River, and above the Naselle River.

The drainage basin of the Willapa River encompasses ~720 square mile, including most of Pacific County and portions of Grays Harbor, Lewis and Wahkiakum counties. Willapa Bay consists of a complex hydrologic water regime with minimal freshwater inputs, though there are several medium sized river channels originating in the Willapa Hills including the North, Willapa, Naiwaikum, Nemah and the Naselle Rivers that enter the Bay from locations at the north to the southeast. The Naselle River provides roughly one-fifth of the total freshwater input into the bay; the largest rivers are the North that joins the Willapa River entering Willapa Channel from the north, and the Naselle that enters the Bay from the southeast. Freshwater inputs from precipitation events mainly arrive during the winter when overall water demands are the lowest. Additional inputs are from the Cedar, Palix, and Bear Rivers, and Smith Creek. Pacific Ocean water enters the Willapa Channel and then leaves again, as on a counterclockwise conveyor belt, most visible at channel junctions. In places, incoming and outgoing water masses appear to move through each other rather than past each other.

Windward slopes in the Willapa Hills bounded by the Pacific Ocean to the west and the Columbia River to the south, frequently experience strong winds during winter months. The Willapa Hills, elevation at 1,000 to 3,000 feet elevation, form a continuous ridge from the Chehalis River valley to the Columbia River. This area receives the full force of storms moving inland from over the ocean, thus heavy precipitation and winds of gale force occur during the winter season. Wind data from a well-exposed site on a ridge (elevation 2,000 feet) near the ocean indicates that wind velocities in excess of 100 mph occur in the higher elevations almost every winter.

The tides in Willapa Bay are mixed-semidiurnal, two unequal high tides and two unequal low tides. The mean daily tidal range varies by ∼20 percent over the length of the estuary and ∼50 percent over the spring–neap cycle when the difference between high and low tide is the least. The mean tidal range for Willapa Bay is from -2 feet extreme low to +12 feet extreme high, and the diurnal tidal range is typically from 8.4 – 9.4 feet. Channel depths range from <30 – 50 feet with maximum depths of 75 – 77 feet below mean low water.

This section provides a summary of natural, cultural, and economic resources at risk in the vicinity of Willapa Bay and the adjacent coastal waters. It provides general information on habitat, fish, and wildlife resources, and locations in the area where sensitive natural resource concerns have been identified. It offers a summary of cultural resources that include fundamental procedures for the discovery of cultural artifacts and human skeletal remains. General information about flight restrictions, wildlife deterrence, and oiled wildlife is located in Section 6.5. This section is purposely broad in scope and should not be considered comprehensive. Some of the sensitive resources described in this section cannot be addressed because it is not possible to conduct effective response activities in these locations. Additional information from private organizations or federal, state, tribal, and local government agencies should also be sought during spills.

This area contains a wide variety of aquatic, riparian, and upland habitats. These habitats support many of Washington’s anadromous salmonid species as well as a complex diversity of other wildlife including mammals, birds, and amphibians. Due to their life histories and/or behaviors, some of these species are unlikely to be directly oiled during a spill incident but may be disturbed by other operations such as cleanup, reconnaissance, or fire suppression activities. Some of the bird species are resident throughout the year, but many others seasonally migrate through this area.

Note: see area maps at end of this section. May include sensitive sites in adjoining GRP regions. 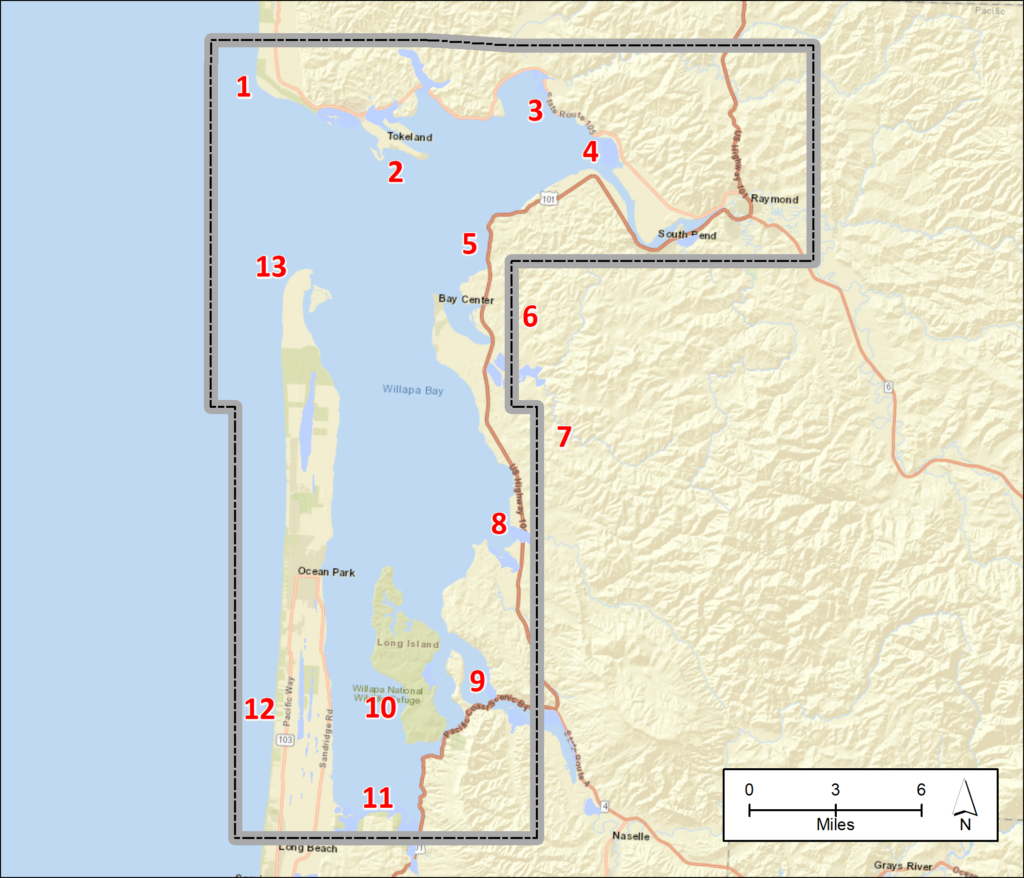 Culturally significant resources are present within the planning area. Information regarding the type and location of cultural resources is maintained by the Washington Department of Archeology and Historic Preservation (WDAHP). This sensitive information is made available to the Washington Department of Ecology for oil spill preparedness and response planning. The Tribal Historic Preservation Offices (THPOs) or Cultural Resource Departments of local tribes (see Table below) may also be able to provide information on cultural resources at risk in the area and should be contacted, along with WDAHP, through normal trustee notification processes when significant oil spills, or smaller spills above reportable thresholds, occur in the area.